It is quite some time since we spoke about our passion for yield curves and their extraordinary features! A yield curve is a line that plots interest rates, at a point in time, for various maturity dates into the future from 3 months to 30 years. A yield curve is not a prediction of future rates but, at the point of plotting, the curve represents all that is known about future interest rates. The first representation below is termed a positive yield curve. This is the shape we would expect the graph to be – the longer we borrow money for the higher the rate – the longer we leave money on deposit the higher the investment return. 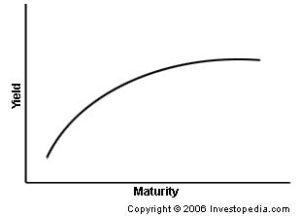 The Y axis denotes the interest rate from zero to infinity and the X axis depicts time from 1-day to infinity.

But short-term interest rates are playing havoc with yield curves as they plot outside of the standard x-y axis into negative territory. Commentators over the years have found solace in the fact that yield curves tend to forewarn of potential trouble ahead. When they invert – higher rates at the near-end and lower rates further out – yield curves traditionally signal the onset of an economic contraction.

Currently, few people outside of central bank circles can make any sense of what’s going on; and there are plenty of cynics around suggesting that even central bankers have lost control of the situation.  Governments and large corporations are now in a position to borrow money at a minus interest rate – meaning that the investors lending the money, in the first instance, are guaranteed to receive less money back. The investors in this type of trade are invariably pension funds and insurance companies; and it’s fairly obvious that adopting this business model for any length of time will end in ruin.

At retail level this development is equally worrying. Depositors and savers are suffering hugely as returns plummet lower. There is a consensus among most analysts that banks cannot afford to drop consumer deposit rates below zero. MMPI accepts that banks have resisted imposing negative returns on consumers but they will surely have to face the stark inevitability. Banks have already seen other interest-rate-related instruments fall into negative territory. Even the safe-haven ECB deposit rate for banks has fallen to -0.40% and has remained at this subdued level since March 2016. So unless banks can lend their deposits as consumer loans they will be faced with a business model that accepts retail deposits at a rate above zero and offloads the funds with the ECB at -0.40%; another calamitous situation that will also end badly.

It is hard to fall in love with yield curves but when you do it’s impossible to let go. The US Federal Reserve seems determined to continue raising short-term interest rates – implying that the US yield curve may soon become inverted. Their next decision will be announced on 20 September.