Home What Is Productivity? 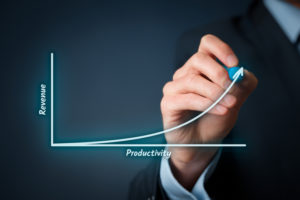 Productivity is perhaps best described as the effectiveness of output – how efficient we are at what we do. It is a term that gets economists drooling because they love the discipline of measuring that efficacy in miniscule detail. But such a gauge of productivity misses a very important point. What about working conditions and human outcomes? Sadly these are often ignored. The conditions in sweat shops and state-of-the-art modern factories are so diverse they’re hardly worth comparing.

It’s almost impossible for the human brain to grasp the incredibly large size of the US economy. America’s Gross Domestic Product (GDP), which captures the extent of the country’s entire economic output in terms of a single figure, is $20.5 trillion – that’s $20,500,000,000,000.

America’s largest state economy is California, which produced almost $3trn in GDP in 2018. This is larger than the whole of the UK at $2.8trn approx. Economists then go on to consider that the size of the labour force in California is 19.6m people while the UK’s working population is 34m. Accordingly, it is suggested, that the productivity levels in the UK are far inferior to those in California since the UK requires a labour force 73% larger to produce the same level of goods and services. Dennis Gartman* maintains that this is testament to the superior, world-class productivity of American workers.

Data outputs from the World Bank places California as the 5th largest economy in the world; ahead of India, France and UK. Another US state, Texas, comes 10th in the league table; ahead of Canada. The Canadian work force comprises 20.1m souls while Texas has only 13.9m – another example of world-class superiority?

When economic theory portrays this macro view, political imperatives demand an immediate improvement in productivity levels from those workers lagging behind. The political response might be to incentivise workers by lowering taxes.

However, when the topic is examined under the microscope of management theory, a completely different landscape emerges. An analysis at worker level suggests that lower taxes are not a high priority. Workers are motivated more by rudimentary reasons of satisfaction; such as, the nature of the work, the workplace environment, delegated responsibility, recognition of achievement, daily/hourly targets, time off, improved work/family balance.

It’s a pity that the two disciplines don’t speak to each other. If they did, the productivity paradox would be resolved in jig time. When Maslow proposed the Hierarchy of Needs, he didn’t specifically address productivity – but he did recognise the stepping stones required to eke out improvements. 1. Physiological; 2. Safety; 3. Love/belonging; 4. Esteem; 5. Self-actualisation.

Most people in the western world have cracked 1. and 2. but, even today, the others still require due care and attention. Maslow’s grading dates from 1943 when the world was at war, and it remains highly relevant. Productivity may be the effectiveness of output but the conditions and circumstances of workers deserve better scrutiny.

*Dennis Gartman is an economist and treasury trader; and a regular contributor to CNBC.