The idea of an effort being useless is counter intuitive. Effort is defined as an undertaking using up a lot of energy and resources. So it doesn’t make sense putting a great deal of exertion into something that’s useless – or does it? 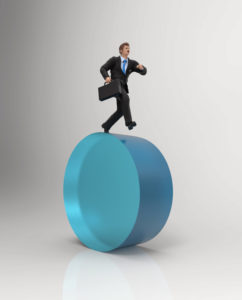 Measuring results in black and white terms as being useful or useless is not very helpful. Clearly the end product of some of our efforts won’t always be useful. Trial and error is a fundamental part of making progress, which implies that some of the effort is wasted on mistakes – but in the comforting knowledge that we learn from those mistakes.

Medical research and clinical trials are examples of areas where the failure rates are high and such effort might be summarily dismissed as useless. However, experience tells us that building on the cases that don’t succeed is a clever way of learning how to make the eventual breakthrough. History is also littered with examples of endeavours that failed to provide a solution in one industry only to be applied successfully in another. The World Wide Web was originally described as a moderately useful tool that allowed academic scientists share obscure research findings.

The lesson of all this is surely that we should not categorise any effort as useless – we should recognise that it might lead somewhere eventually or it might prove useful in another application. Western Central Banks have deliberately provided huge amounts of liquidity to the financial system over the past several years. Have their efforts proved useless? Many commentators certainly believe so – MMPI disagrees.

It is too easy to criticise the actions of Central Banks as being highly inflationary and untested miscalculations. Without the additional liquidity it is doubtful that markets would have recovered. Imagine if consumer confidence had remained depressed for 10 years – where would that have left us? So even though the determined efforts to drive interest rates lower didn’t seem to be working the immediate outcome is worthwhile – even though longer-term effects could potentially be damaging. Nobody knows for sure how the world will recover from such a splurge of money, created out of thin air, leaving Central Banks with massive liabilities. But the efforts were not useless!

In 2009 MMPI noted that the National Assets Management Agency had the potential to have a profound effect on all Irish residents and not simply high-profile property developers. It was proposed that NAMA would buy property assets from the banks at inflated valuations and manage these assets over 10-20 years in an effort to recoup as much money as possible for Irish taxpayers. The property loans in question were valued in the banks’ books at some €90bn. NAMA ended up paying the banks about €72bn for assets worth less than €30bn in a fire sale. The compromise position was a balance between paying too much and allowing the banks to go bust – either way a cost to the taxpayer. There are now accusations of undue haste but the effort was not useless!