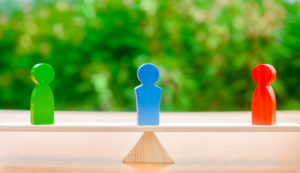 Conflicts arise in all walks of life and, in their own way, are equally significant. A clear conflict of interest can be defined as any action or relationship that might impair (or appear to impair) one’s ability to make objective, reasonable and fair decisions. There are many obvious examples, but conflicts also exist underhandedly. Rapacity is often the main culprit.

MMPI believes that conflicts have a more elementary basis in right and wrong. Rules and regulations compel us to do things right; but our moral compass propels us to do the right things! There IS a real difference!

However, conflicts occur at a much more fundamental level. Witness the scene at the buffet counter. There are three sausages left. The young boy is hungry enough to eat all three – but then there are none left for others. What is the right thing to do? It’s a real conflict in his young life. If nobody notices, are there really three sausages left?

The young boy grows up to play football and his Dad is the manager of the team. Both want him to play but he’s not the best player. He recognises the three-sausage dilemma and switches teams. Conflicts are everywhere and they have a sneaky habit of repeating themselves in future guises.

The concept of consuming conflicts is particularly relevant in financial services where financial advice must, at-all-times, be seen to be impartial, unbiased, unfettered and beyond reproach. Is it proper that banks provide financial advice, but only endorse their own products? Should we expect insurance companies to point out the better aspects of rival policies?

MMPI holds regulatory authorisations that oblige us to provide advice on a wide selection of suitable products. Even where we create our own investment products (and we believe them to be superior to other products in the market) we are still obliged to consider all of the alternative options from other providers – in order to ensure that the customer receives appropriate advice.

However, the lesson of the three sausages is never far away. MMPI recognises that, in the course of its business advising retail clients, it has a real sausage dilemma. It has a constant conflict of interest because it receives fees for its products and services. Butchers and bakers also get paid, but they are not regulated financial businesses.

Correctly, the Central Bank of Ireland demands that all financial services companies should document their policies on conflicts of interest and should always keep customers informed where a potential conflict might arise.

Intriguingly, the Central Bank itself is not immune to this dilemma. One arm of the regulator is charged with ensuring that its supervision of companies is such that they have the capital resources and infrastructure in place to withstand financial shocks and return to profitability and good health – whilst a second arm is charged with imposing financial shocks on financial firms where mis-selling and consumer harm is found. Conflicts certainly abound! We should all learn from the three-sausage parable!