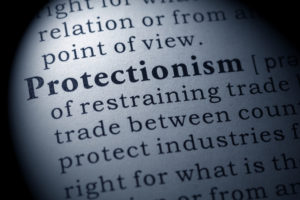 Protection conjures up images of security, guardianship, insurance, safety harnesses and swaddled babies. But add three letters to the end and it takes on an altogether different tone. Protectionism is the defiant act of taxing imports in order to shield domestic industries from Johnny Foreigner. It promotes borders and flies in the face of globalisation and free trade. It might also be argued that it contains a tenor of racism.

Many are appalled at the tactics of the US and UK governments in seeking to impose trade barriers; but much of this recalcitrance is down to an inability to accept change. Protectionism was a way of life for many industrial countries in the past (and it remains so for some developing countries). The benefits of free-trade heralded in a different era. Now the US and UK are building new defences allied to protectionism. Why should anybody care?

In bygone days the US frequently capped imports to protect the car and steel industries during downturns. The motivation was to protect jobs – plain and simple. This went down well politically. The current US motivation for imposing tariffs on several industrial goods is national security. The difficulty with that line of thinking is that all countries could use the same defence for ripping up existing free-trade agreements.

Protectionism works just fine as long as nobody retaliates. The US slapped tariffs on steel imports and, in direct response, other countries hit US agricultural exports. This has damaged the livelihoods of 3.2m American farmers and helped 140,000 steelworkers. However, the same argument can be made for free-trade. Globalisation works just fine as long as everybody plays by the rules. If Ireland reduces its corporate tax rate then others will react.

The flow of money through traded goods pales into insignificance when compared to the cash flows for non-goods and services. Those countries in surplus have a natural bent to spend and those in deficit will go out of their way to attract that spending. In effect, Europeans will be attracted by American assets whether it is real estate and other infrastructure; or government debt; or company shares – or invisible services like tourism and intellectual property. One way or another, the resulting imbalances will tend to be squeezed over time by flows of money back and forth.

The imposition of tariffs to one aspect of this finely tuned relationship is detrimental to the whole. A trade tariff may result in a quick result in, say, safeguarding local jobs but it will ultimately lead to new interactions developing between the various participants.

Rather than being aghast at protectionist barriers, observers should recognise that they are a natural part of the evolution of trade. Changes do happen. Relationships do break up. New bonds and ties emerge. It is very likely that the new affiliations will be better and stronger than those that went before. The mechanics of change are not easy to digest when the transformations are sudden but remember that change always presents opportunities (always)!