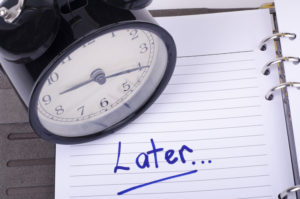 The act of delaying or postponing something (often a decision) is our usual understanding of procrastination. The word “tomorrow” lurks large. But the definition also attracts notions of dithering, stalling, avoiding, hesitating, indecision and downright incompetence. Some medics even suggest that procrastination may indeed be a mental illness.

Psychiatrists define procrastination as the wholly voluntary delay of an intended decision or action even where it will create likely negative consequences. There are two possible explanations. One is that the decision to defer is a tactical assessment that the matter should be given further consideration. The other is that people are too anxious to make the decision – putting it off till tomorrow is a real cop out. Consumers are very reluctant to admit that the latter is a reality.

LastMinuteDotCommers are supreme procrastinators. They frustrate all and sundry by waiting and waiting and waiting to decide. Sometimes this can be associated with being busy. They have lots of decisions to make and they tackle them whenever. But more often than not its root cause is anxiety. They see the decision as tough and hope against hope that they don’t have to face up to it. Delaying the action just might mean it goes away – it never does!

In most businesses there is an inherent personnel network and chain of command. Indecision slows things down. Procrastinators have a real impact on others in the chain. Wavering means that fellow colleagues cannot achieve their tasks in a timely fashion.

Our interest in procrastination in MMPI is the indecision displayed by many consumers when it comes to making a financial commitment. Impulse buying is commonplace on shopping channels and through smart phones; and yet important decisions on investing, insurance and mortgages are deferred. Could it be that the message from financial advisers isn’t attractive enough (it’s really hard to make insurance look sexy) or is it simply procrastination masquerading as fear?

Despite references to “tomorrow” procrastination isn’t a time management issue. It’s an emotion control problem. We are masters at delaying decisions that make us feel down. We prefer to do the positive-feeling stuff first and then the other stuff. With better emotion regulation procrastination could become obsolescent.

Above all else procrastinators have a sense of humour – and that can’t be bad! We are always being told to live in the moment – hard work pays off later, laziness pays off now. And laziness is nothing more than the habit of resting before we get tired.

One of today’s greatest inventions is tomorrow.

If it wasn’t for the last minute we’d get nothing done!

Procrastination always gives us something to look forward to.

After all is said and done – more is said than done!

Never put off until tomorrow what we can do the day after tomorrow.

But for those who do not procrastinate and are often on the receiving end of poor emotion regulation we have the following salutary beatitude. Blessed are the flexible for they shall not be bent out of shape!