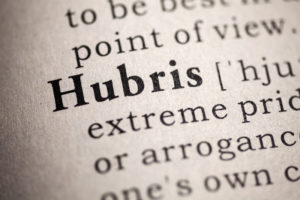 Hubris is the condition of overbearing arrogance and/or excessive self-indulgence; the belief that one will always succeed in every circumstance. Hubris can affect politicians and senior business managers who have remained in power over many years. Hubris should not be confused with genuine self-confidence where one acts to the limits of one’s ability and truly recognises one’s limitations. Nor should it be confused with realistic optimism where one behaves in a positive fashion and expects a favourable outcome. Hubris is the excessive pomposity where self-confidence knows no bounds – the unhealthy sanguinity that every problem can be successfully overcome. The disorder extends to delusional behaviour and domineering egotism.

Research suggests that hubris is the result of power impacting on the brain – power affects all reasoned decision making – a condition known as the power paradox. The resulting state of mind certainly has no regard for due process, the rule of law, constitutional niceties, effective Plan B controls and other recognised disciplines designed to protect and buttress a business model or a political strategy.

The power paradox helps explain the peculiar behaviour of seemingly clever and intelligent individuals once they have assumed power. The talented traits of seeking guidance from peers and feeling empathy for others, which are essential in attaining power initially, seem to vanish inexplicably once power is achieved. Academics call this mirroring – an ability to slip into another person’s shoes to view life from their point of view. It seems that power blocks this emotional pathway forcing the brain to become egocentric.

We dare not mention any names but we feel sure that readers will identify certain hubristic characters from the political/business world. However, MMPI believes that the research findings suggest something a good deal more worrying. If the strange change of behaviour of the powerful can be explained away by a biological nuance, what are we to make of those who hold subordinate positions? Are they also organically impaired or are they just simply fearful?

Various real-life examples suggest that underlings get swept along by the exuberance and fail to identify the excesses until it’s too late. Many hierarchical organisations exaggerate the effects of hubris by not encouraging challenges to those in power. The leader must always be obeyed. No counter arguments can be tolerated. Cynics note that speedy effective decisions are never made by collegiate committees and that, therefore, forthright decision-makers are the best role models.

The sharing of confidential intelligence has played a role in confronting many authoritarian shortcomings. But surely the ideal solution is to identify those who are predisposed to hubristic behaviour and ensure that they never lead alone? Imagine a proper comrade system for politicians and business leaders where decisions are contested and behaviours curtailed.

Underpinning all hubris is the alpha male factor – the virile tendency to portray a tough, non-compromising exterior in an effort to defeat others. The infliction doesn’t appear to bother females! Could we really have a genetic explanation for actions, which on the face of it seem outrageous?