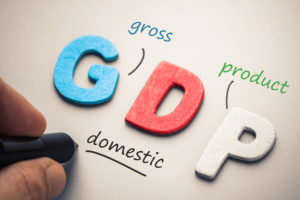 Many non-economists are familiar with the term Gross Domestic Product (GDP) and some will even venture a vague explanation as to what it means. But few outside of the inner circle truly grasp how fabricated and meaningless it is.

In its purest form GDP seeks to measure the total market value of goods and services in an economy. But even that short sentence is a toxic treatise. Measuring the total activity in a country is very, very difficult. Do we include only legitimate services and ignore the black market? Do we count only those services that cost money and ignore intangibles that provide great value for free? For example, how exactly can we measure the internet and the productivity it brings to the economy?

First-year economic students learn that GDP=C+I+G+(X-M); where C represents all of the spending carried out by consumers; I measures business spending and investment; G captures all government spending and infrastructure; and (X-M) is the difference between exports and imports.

All seems calm. A business avails of government grants (land, buildings, tax incentives, etc.) to manufacture a product or provide a service. Consumers pay for the consumption of that output with income derived from employment, which is in-turn taxed by the government. But what about a band that produces an album and releases it free-of-charge on the internet in the hope of generating ticket sales at future concerts? What exactly gets captured in the GDP data. The band members expend energy making the music – the consumer gets enjoyment listening to the output – the government receives no taxes. How does GDP assess this commonplace activity when there is no market value to calculate?

In the modern world, the old ways of measuring GDP are hopelessly inept. GDP measures how much money changes hands (market value) but not how much the nation benefits (indirectly). Does the world’s oldest profession benefit the economy more by being conducted in the open or in secret? Illicit drug dealing is similarly compromised. Economists do try to measure such benefits in a rather ham-fisted way by assessing the difference between how much the client is willing to pay for the service and what it actually costs. This is important because consumers regularly talk about bargains; but it is hardly a scientific measure.

One could be forgiven for ignoring this gibberish – who cares? Well, unfortunately, it has practical implications for all of us. GDP (even with all its faults) is a cornerstone of government decision-making. As a starting point, policymakers will always want a measure of consumer confidence before they impose new legislation. An improving GDP figure assumes consumers are a contented lot, therefore, a proposal to increase the pension age might reasonably be met with less resistance.

But if the GDP measure is so out of touch is it any wonder that policymakers are not in tune with the populace at large? Less reliance on GDP figures is warranted. A greater acceptance that it’s really a Grave, Duplicitous Prank is not unjustified.