Home What is Kurtosis? 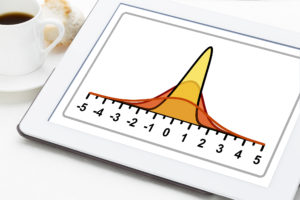 The financial markets have a wonderfully, annoying habit of producing terminology that can act only as an obstruction to greater understanding by the masses. The terms contango, backwardation and fungible come to mind. But perhaps the most obscure of all is kurtosis.

Financial statisticians employ kurtosis to describe a long arching curve that measures the graphic tail of the probability distribution of real-valued random variables!! A Leaving Certificate student might put it more subtly, thus. When probabilities are plotted on a distribution graph they don’t follow normal distribution patterns. They have higher levels of kurtosis – meaning extreme events happen more often than is otherwise the case. So, to paraphrase, kurtosis is a measure of the likelihood of extreme events happening. (Well why didn’t you say that? – Ed)

If this remained hidden away in academia consumers would be forgiven for musing over the sanity of statisticians. But the likelihood of extreme events happening should be a concern in many walks of life. When we ponder extreme occurrences we tend to consider only those that happen suddenly and unexpectedly; like storms, plane crash, earthquakes, etc. Or in finance, extreme events can mean sudden lurches or shifts in stock-market or commodity prices. But we should also reflect on events that take time to become extreme like a steady rise in bond prices or a prolonged move towards negative interest rates.

The financial markets have moved into extreme-event territory almost imperceptibly – it has been coming for a long time. Bonds were said to be overvalued when yields were 3% and falling; now bond yields have moved below zero and are steadily falling further. Shares were said to be overvalued when they hit all-time highs in July 2019. Then they let off some steam but have since climbed higher. As far as we know, in over 5,000 years of recorded financial history interest rates have never been negative. Now they are!

Kurtosis may be a cute word that describes something complex but consumers can easily see through the convolutions once they can touch and feel the realities. Negative interest rates have been on the horizon for several years but most people have been in denial. Banks are shrivelling to their core at the likely consequences of imposing negative returns on consumer deposits. Pension funds are grappling with their very existence in their traditional form. Insurance companies are facing dwindling reserves that they normally use to buffer against claims.

These are some of the most extreme events the financial world has ever seen. They haven’t occurred suddenly and surprisingly. They have arrived like an ocean liner – slowly but assuredly. In many respects, this is the worst type of scenario. Human nature is attuned to dealing with disasters and sudden shocks. Extreme weather or financial catastrophes are not showstoppers. Yes they hurt but life goes on.

Consumers are not so good at dealing with slow-motion tsunamis that threateningly arrive over time. Such kurtosis can become overwhelming and tugs at the fabric of human resilience.