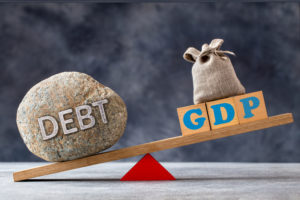 First, let’s consider some definitions. Wealth is described as the total aggregation of economic resources – including assets and long-term savings. But importantly, it must also include the level of debt incurred in achieving those economic resources in the first instance. Consequently, wealth is often labelled as net worth – essentially assets minus borrowings. Economists usually apply the term to scarce resources that demand prices; implying that goods and services that are free of charge do not encompass wealth.

GDP is short for Gross Domestic Product, which is a measure of the size of an economy. More specifically it represents the total value of final goods and services in the economy during any specific timeframe. Students still learn the well-worn equation; GDP = private consumption + private investment + government investment + government spending + (exports – imports). Therefore, it is possible to track economic performance within an economy by comparing measurements periodically. However, it is not easy to make accurate comparisons between economies for a variety of reasons but primarily centred on taxes; trade tariffs, government interventions and currency fluctuations.

For example, if the timeframe was forever, then the statement appears to stand up to critical scrutiny because there simply would not be enough value created by economic activity to transfer to wealth. If the timeframe was one day and, say, borrowings were prohibitively expensive then wealth could not be created in excess of economic growth.

Infuriatingly, neither of these laboratory timeframes exist in reality. Time is a rolling phenomenon and wealth creation is a variable wonder. But there is an undoubted link between wealth and GDP – it is just so very awkward to measure the connectivity.

There is an academic argument suggesting that we shouldn’t want to provide mathematical proof of the notion that wealth cannot exceed GDP over time – it should be taken as a given and government policy and economic conditions should adjust accordingly. Needless to say, this is even more controversial to some.

If we allow one further modification to be made to our understanding of GDP, it might ease our flow of thought and understanding. GDP over time is effectively income. It represents the benefit to the economy from one time period to another. So, let’s rephrase our original statement – wealth cannot exceed income over time. It now seems much more plausible that the only way wealth can exceed income is by way of debt.

This is a longwinded way of concluding that economies can ebb and flow, but that wealth cannot exceed GDP over time unless debt exists at some level. So, perhaps, we can realistically convert our construct more potently as: “How much more can we borrow??”