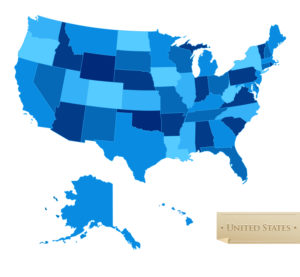 There was a great response to last week’s piece on US Government but there is one overriding question that abounds, “What exactly is the Electoral College?”. The word “college” misleadingly prompts people to think of a university (and why university academics (or even students!) should play such a leading role). But thinking more of “collegial” is better – having authority shared amongst a number of people.

The broad nuances of the US Presidential election are strangely like aspects of the Irish Dáil vote. The electorate is broken up into constituencies (US states) meaning that the winner of each constituency vote may not carry the majority vote nationally. For example, Hillary Clinton received 3m more votes that Donald Trump in 2016 but it is not a first-past-the-post system so she did not get elected.

Each state holds a certain proportionate weight based largely on its population, which means that winning in California is exactly the same as winning all of Maryland, Minnesota, Missouri, Nebraska, New Mexico, Wisconsin, and West Virginia combined. The candidate getting the most votes in California, regardless of the margin of victory, receives all of California’s 55 “electors”. State populations are certified by census every 10 years; (last 2010).

The “electors” are people chosen by the state’s courts to represent the state in the Electoral College. But the “college” doesn’t have a home. Instead, the electors go to their respective state capitals and declare their vote (with a bit of pomp and ceremony) for the candidate who won the popular vote in their state. When all of the electors have made their declarations the person with the highest number of elector votes wins. This aspect is very like the Irish Seanad elections.

There are 538 electors in the Electoral College (remember NOT a university). The number is made up of 435 (House of Representatives seats) plus 100 (Senate seats) plus 3 from Washington DC. The states with the biggest clout are California (55), Texas (38), Florida & New York (29) – and those with the smallest representation are Alaska, Delaware, DC, Montana, North Dakota, South Dakota, Vermont Wyoming(3).

Following the electoral college votes, the process moves to the House of Representatives (Dáil) where the new President is formally declared. If, for any reason, the new President cannot be declared before January 20th next, the current vice-President assumes temporary power.

Given that 538 is an even number there is the intriguing, though highly unlikely,  possibility of a tie. The quota is 270 but 269-269 is arithmetically possible. With the unprecedented times we are living through wouldn’t it be just remarkable if mathematics played a Machiavellian role in electing the next US President?