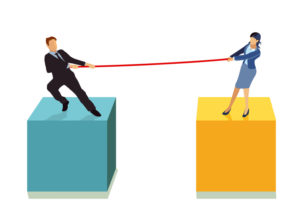 The term “tug of war” originally described struggles and tussles – contests for the upper-hand. It was only much later that it evolved into a name for a sport featuring rope, ribbon, brawn, muscle and a devious degree of dexterity. In truth, almost every challenge we face can be depicted as a proxy tug-of-war. We seldom get our own way. We constantly duck and weave to find a pathway through. All such confrontations infer a tug-of-war. We tug at our preferred solution but others oppose our approach and proffer alternatives. And so, the wrangle continues until a winner is declared or a drawn compromise is accepted.

At their very core, financial markets encapsulate an ever-raging tug-of-war between a myriad of participants. For those commentators who pass the time trying to understand market dynamics, there comes a depressing realisation that the machinations are extraordinarily complex and deeply inter-dependent to allow for simple analysis. This explains why market predictions and logically-sounding forecasts can go so awry. But that doesn’t stop optimists pitching their opinions.

Here’s a typical contested dilemma. Interest rates are at all-time lows and inflation is raging. That sentence, itself, is open to some challenge but we think we’d win the joust. The presumptuous follow through is that interest rates rise to counteract the rising levels of inflation. Let the tug-of-war commence. Politicians don’t like elevated interest rates because it means higher borrowing costs for their constituents. Non-politicised Central Bankers oppose this stance. Green enthusiasts cry out for a reduction in the use of fossil fuels – in  the short term leading to higher energy prices. Consumers certainly won’t like this. And so, the tug-of-war continues – ad infinitum it seems.

We could try and foretell where the next tug-of-war will emerge. This might stoke our sanity but the buzz won’t last long. Inflation to hit 12% p.a. signs of a major constitutional crisis in the US this year – not just a “hung-Dáil” after the mid-term elections but a proper emergency. Oil prices to hit $200 a barrel. Medical breakthroughs to eradicate Covid-19 and separately extend life expectancy by 20 years. Nuclear power rebrands as atomic fission and achieves widespread acceptance. Some readers may think that the above list is somewhat exaggerated but MMPI is prepared to tug (rather gingerly) on its side of the rope.

Possibly, the greatest tug-of-war this year will be the battle between the US Federal Reserve and the rest of the participants in global financial markets. Maybe, the dates we should consider most in 2022 are not birthdays and bank holidays but Jan 26; Mar 16 and May 04. For these are the dates when the Fed is expected to make its far-reaching decisions on interest rates. Decisions that may not meet with universal approval. The tug-of-war could be epic.

The Fed has already signalled that substantial changes are afoot and the language that it has used to-date seems soothing. However, they may not get their own way or they might lose their grip on the rope!