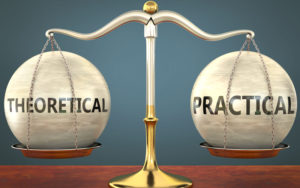 More theories abound about financial markets than about any other human behaviours. Some are interesting. Some are self-perpetuating. Some are hokum. Most are about as useful as a paper scissors. But how are consumers to know how to navigate the nuances of finance? The simple response is to avoid temptation unless you absolutely have to. Avoid the glossy advertising and the silky brochures.

Economics teaches us that price is a function of demand and supply. It’s a plain and simple truth that can get buried in statistical aberrations. Finance tends to focus on graphical charts that are very thought provoking and can seem conclusive, (until you see the next chart – Ed).

Here are some of the theories – please make up your own mind.

The Efficient Market Hypothesis states that current market prices are fully reflective of all of the market information that is known about the price. Therefore, the markets are efficient and current prices are accurate.

The Greater Fool Theory suggests that price trends will continue indefinitely provided there is one more purchaser or seller at any given price. Using the word “fool” is highly disingenuous because many of the investors of last resort are computer programmes!

The 50% Principle simply states that a price trend will eventually correct itself to 50% or more of its original level before resuming its trend. The theory doesn’t describe what prompts the correction or the resumption.

The Rational Expectations Theory advocates that future market movements will be logical and rational. There is no further thought given to the definition of rational in this context.

Prospect Theory can be coined the loss-aversion theory because investors are typically more afraid of losses than they are driven by gains. The theory suggests that investors choose those investments with the least prospect of delivering losses.

The Short-Interest Theory espouses that a price that is out of favour will eventually become more appealing once the fall in the price reaches a certain level.

Theories are fine and dandy; and it can be useful to arm oneself with knowledgeable thought but nothing, literally nothing, beats sound, practical advice. Blindly following theoretical transcripts may result in individual investors selecting wholly unsuitable options. In such instances, the theories are nothing better than nonsense.

What really matters is that market prices are driven by demand and supply. Sometimes these variables make sense to some people – other times they don’t. There really is no need to make it any more complicated than that. There is real beauty in simplicity. It is, after all, the ultimate sophistication.