The Power of Two

Home The Power of Two 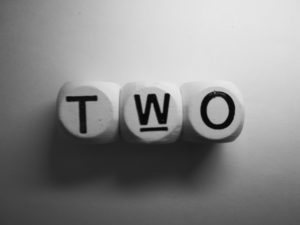 The number two (2) has long held a fascination way above its station – after all it’s quite a small number – but the power of 2 can have far-reaching consequences. In arithmetic, the power of 2 is a number written as 2n where n is a whole number. 22 is too squared to contemplate!

Population replacement requires 2.1 births but the world fertility rate has been well above that for decades. It is now heading back towards 2. The ebbing of tides is caused by the gravitational pull of the moon. It could produce several high tides everyday but only 2 occur. In our descriptive language we tend to employ synonyms and antonyms in equal measure – 2 of a kind, hot/cold; big/small; nice/nasty; ghastly/pleasant. There is no particular reason for this other than another demonstration of the irrational power of 2

Those over 40 will remember the need for 2 spaces at the end of a typed sentence but word processors have made this redundant. It was always thought that it takes 2 to tango sexually but modern advances in medical technology prove otherwise.

Major central banks worldwide are also enthralled by the power of 2. For most, and for a very long time, their policy levers have been controlled by a requirement to deliver an inflation rate of 2%. But why should this be so? It’s not doubted that a little bit of inflation is a good thing but why is a level of 2% so sacrosanct? It is really hard to fathom. The official explanations are that an inflation rate of 2% over the medium term represents nominal price stability. However, this stance is undermined when one considers that the 2% figure has been in place for decades despite significant developments in the world economy and revolutionary changes in the way consumers purchase goods and services.

It is perhaps a little cynical to say it but it seems that the world’s interest-rate-setters may have been overly influenced by the magnetic attraction of the power of 2. It can be difficult to change the habits of a lifetime and dramatic policy shifts are unwelcome and are not recommended; but we can’t help thinking that a re-appreciation of the power of 2 and a move away from the rigidly-held viewpoint could produce better results.

The Indigo Girls may have had it right: “Chase all the ghosts from your head; you’re stronger than the monster beneath your bed; adding up the total of a love that’s true; multiply life by the power of two.”