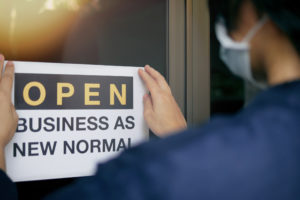 There’s little doubt that we are currently going through unprecedented tumult. Somebody somewhere is recording events as they unfold. Others are far too busy with day-to-day survival to be bothered. Eventually, historians will paint a picture that few of us will recognise. So, let’s try and take stock of what’s happening.

The HSE, which has for many years been guilty of exceeding budgetary expenditure (by some distance), has captured our affection and has won itself huge admiration. Politicians have been judged not on their incompetence but on their ability to project positivity in troubled times. We have a hotchpotch of an administration that we would never have imagined. Our two civil-war parties have entered into a truce but have not truly surrendered their past.

As might be expected, the financial markets reacted badly to the economic lockdown. Logically, share prices are a reflection of a company’s future earnings, therefore, lockdown equals depleted future income. Not necessarily so said the Central Banks, who printed money with reckless abandon. We now have democratically elected governments behaving like communist-era rulers – placing private assets under state control, directly intervening in supposedly free markets to manipulate prices and having little regard for segregation of power and duties.

It is said that in times of emergency, previous norms are re-written. Our new norms are getting us through. Slowly but surely normality is returning but what is it leaving in its wake? We have the bizarre situation where governments and many of the larger corporations can borrow money at no cost. In fact, in some markets, lenders are actually entering into long-term deals to lend money at a guaranteed loss. Intriguingly, this also affects the escrow account that Apple established in Ireland to settle disputed back taxes. This fund is guaranteed to lose money over the years. If the dispute continues long enough there may be nothing left to fight over!

As usual, there are plenty of commentators about with varying interpretations on what’s happening and what’s likely to follow. MMPI remains confident that enthusiasm is justified. We are in an economic crunch that is caused by a non-financial event. Companies can survive once cash-flows return to pre-pandemic levels. Sadly, some companies will not re-open; with owners simply not prepared to go through the pain barrier. And that really is the crux of the matter. Despite undoubted hardship over the past few months, on all sides, can the human spirit bounce back?

It is incredible how confidence can swing things around. It can achieve the unachievable. It can surmount the insurmountable. But it needs a kick start. Confidence is a feeling that all will be OK. It’s not an ever-present feeling but it never disappears. It’s always lurking – waiting for its opportunity. In these troubled times it is human confidence, above all else, that will prevail.

Taking stock in this environment is not easy. There are many moving parts. Who would have believed negative interest rates? – or the All-Irelands in Christmas week? Strange times indeed!