Stagflation is one of those words that crops up every so often in the economic cycle. It refers to a monetary environment where inflation rises to higher levels but economic growth fails to pick up. On the face of it, this doesn’t make sense because rising inflation; higher wage demands and resurgent economic growth normally go hand-in-hand. Given that inflation has been very subdued for close on 10 years one could be forgiven for thinking that stagflation is a thing of the past. MMPI begs to differ. 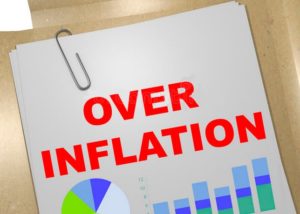 The last big stagflation period was back in the 1970s and it proved enduring and hard to contend with. Before then economists didn’t even recognise the term stagflation because it was to them inconceivable to have high inflation and an anaemic economy – inflation was always seen as a by-product of growth. Since the economic crisis of the late 2000s growth has been restrained; and MMPI has been persistent in its cry that “without growth there is no hope”. In the period since 2010 Central Banks around the globe have undertaken initiatives designed to promote growth – but so far to no avail. Their actions should have prompted inflation and there are some signs that inflationary pressures are beginning to emerge in some economies, most notably the US.

If higher inflation comes to pass (it remains imponderable) then stagflation will almost definitely take hold. Many argue that inflationary pressures will likely be driven by labour shortages and the inability of robots to compensate adequately. Early signs of this are now appearing, particularly in the US and Japan. Of course, immigration is a great safety valve where it is tolebrated and encouraged. Unfortunately, it seems that many countries may be clamping down on immigration at just the most inopportune time. Another solution might be for workers to work longer hours and to extend their working life well beyond the current retirement age. But, here again, the life-work choices of most workers do not conform to what’s required.

Nevertheless, economies are extremely resilient and do display remarkable qualities in adaptation to overcome even the most dire predicaments. Sadly, stagflation is one of those environments that has proven intractable in the past and there is nothing to suggest that current regulatory and political policies will be capable of dealing with it in the future.

Idealistically, we should wish for either, higher inflation and a corresponding pick-up in economic growth or, alternatively, some inflation and some growth. Stagflation is definitely not welcome.