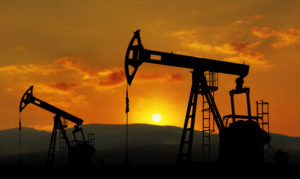 Oil is a fossil fuel derived from decayed plants and animals. This is the received wisdom – right? Wrong! [It’s abiotic say some. It’s physical rather than biological.]

OPEC is made up of 3 or 4 Middle-Eastern oil producing countries – right? Wrong! [It has 14 member countries from across the globe.]

The Gulf of Mexico is the world’s most expensive oil canvas – right? Wrong! [This is just a crude joke!]

The “paradox of plenty” ensures that oil-rich countries have lower economic growth – right? Wrong! [This is old-hat thinking – just look at USA.]

Somebody somewhere knows what’s going on – right? Wrong! [If anybody thinks they know, they’re delusional.]

Oil is the industrial world’s number one source of energy. Despite its bad press for being off-green it is far too strategically important to be replaced. Environmentalists may win some battles but oil will continue to burn for a very, very long time. Currently, solid demand, stagnant supply and ever-growing geopolitical risks should push oil prices even higher – but many commentators argue that with the explosive growth in US shale oil the oversupply will eventually lead the market lower.

Logically, political tensions in oil-producing countries like Venezuela and Iran should encourage more uncertainty but much of that uncertainty could be dissolved at the next OPEC meeting in June 2019. OPEC remains a hugely important mouthpiece for the world’s oil industry.Oil producers tend to form themselves into dictatorships and attract terrorism, corruption and violence. As always, our thoughts are written as a polemic. We wish the situation were different but it’s not! Oil has high-energy density; is widely available and is embedded in a huge variety of industries. Oil refining produces highly toxic outputs; emits carbon dioxide and pollutes waterways.

Like it or loathe it oil is an intrinsic part of our daily lives and has been in human history for generations. Some consider it indispensable. Even the three wise magi of biblical times deemed essential oils to be on par with gold. What were their names? Gazprom, Balthasar G. and Melchior – even today they are all connected with the oil industry. It can’t be bizarre coincidence surely? It’s an ineluctable conclusion – oil is like an eternal spring. “Winter is on my head, but eternal spring is in my heart”, Victor Hugo. “Oil wells are boring!”, Anon. “Would that I were a dry well for that would be easier than to be a spring that the thirsty avoid drinking”, Khalil Gibran. Oil myths exposed!.