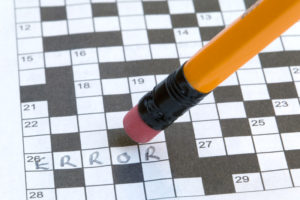 It’s unquestionably the zaniest title we’ve given any Thought Leadership article: O.B.O.E.!! We’re not talking about the musical instrument that’s fiendishly difficult to play; or mistakenly synonymous with Stranger On The Shore (Clarinet); nor the perfect fit for Morricone’s delectable Gabriel’s Oboe. Nor are we referring exclusively to computer programming mishaps. Our O.B.O.E. is an acronym for Out-By-One-Errors and it affects us all in our daily lives.

The most commonly cited example is the so-called fencepost error, which caused problems for the Romans. If you build a temple (fence) 30 metres long with pillars (posts) spaced 3 metres apart how many pillars do you need? 11 NOT 10! (OBOE – Q.E.D.). Similarly, given 11 pillars how many spaces between them? The correct response is 10. And if you extend the temple by another 30 metres how many pillars will you have? 21 not 22!

O.B.O.E. also plays tricks with time. If you purchase an item that allows you to return it within 14 days how many days have you got to consider your options? Say you make the purchase on a Wednesday most people will assume the item could be returned on Wednesday fortnight – but 14 days is Tuesday!! Should we count the day of purchase? No say consumers – yes say suppliers. Counting from day 0 is a regular O.B.O.E. It must have been very confusing for the Romans because zero wasn’t invented when they were doing their sums.

If you place money on deposit with your bank on the 1st May and withdraw it on the 31st May how will the interest-days be calculated? 30 argue consumers, counting from 0; 29 argue the banks, counting from 1. If the funds are lodged early morning and withdrawn late afternoon could consumers gripe that the answer should be 31 days?

It’s complicated enough to ponder these examples but consider the compounding effect of OBOEs in computer programming. Since computers run on a series of binary bits 0s and 1s, potential out-by-one-errors are catastrophic. And yet they do occur; quite often in fact!!

In 2012, Knight Capital, a US finance house, lost $440m on the stock markets in less than one-hour’s trading. Its computers issued a series of repeated loss-making orders until they were manually shut down. Everybody was tight-lipped and a computer bug was blamed – it was actually an OBOE.

Ironically, also in 2012 Apple decided to create its own maps for mobile phones instead of using Google Maps. The overlay of all the inputs that go into developing accurate maps is complicated. Getting the four cardinal points right (NSEW) is fundamental to where everything fits on the page. You guessed it, Apple’s software was off by one leaving landmarks in strange new places.

Hourly-rate employees will have difficulty completing the five tasks 8-12 in a 8.00-12.00 timeslot – they’ll only complete four; whereas, daily-rated employees will easily manage between the 8th and 12th day. Within the symphony orchestra have compassion for the intricate woodwinds behind the violas – they’re true oboes!