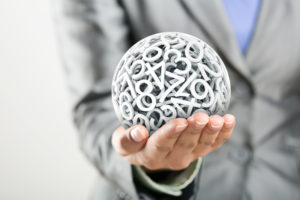 Looking out for number one has become synonymous with egocentricity and selfishness but it has a deeper connotation. It turns out that number one takes inordinate precedence – the actual integer not the self!

Let’s say you examined a large set of numbers – anything as diverse as, say, the heights of buildings, animal populations, census statistics; shopping bills; etc. – basically any big number set. If the sample is large enough you would expect the statistics to produce completely varied results and if you examined the first digit (1-9 on each line – ignoring arbitrary zeros at the start) you would expect each number to be represented proportionately 11.1% of the time (or 1 in 9 times).

But time after time this is not what shows up in reality. The proportional frequency of each first digit overwhelmingly favours number one (30% of the time). Even more bizarrely, the numbers 1-9 decrease in frequency in perfect sequence; with numbers 7-9 appearing as the first digit far less often. This declining order occurs so uniformly across any large number set that a mathematical formula has been devised to demonstrate the expected proportion of numbers beginning with the leading digit.

The first person to truly appreciate this was the mathematician Simon Newcomb when he noticed that his book of maths calculation tables was frayed more in the earlier pages than towards the back. People performed more calculations using numbers that began with lower digits!! Much later Frank Benford noticed the same pattern and proved the theorem – hence the phenomenon is now called Benford’s Law.

But a mathematical law must have a universal application – the law of gravity applies everywhere, for example, and not just in selected places. So if Benford’s Law truly is universal then it must apply to every large data set. There is growing evidence that it does. However, the data set must be sufficiently large to eliminate contaminants – clearly there are no politicians in the Dáil whose age begins with 1 and there are only 10 lotto numbers beginning with 1. These data sets are too constrained and are not universal enough to satisfy Benford’s Law.

Rather than simply having academic interest this curiosity has very real practical implications; it can detect fraud! It turns out that financial data fits neatly into the theorem. For those who may be minded to falsify financial accounts or tax returns your sequencing of numbers can leave tell-tale signs of irregularity. When creating numbers we have a tendency to use too many 5’s; 6’s and 7’s, for example, and not enough 1’s and 2’s. Applying Benford’s law an auditor or detective could easily uncover the untruths and, of course, in the modern world of high-speed computers the sequencing of digits can be accomplished in double-quick time. However, evidence of inconsistencies does not prove fraud but highly unlikely number sequences certainly warrant further investigation.

MMPI has applied the law to share prices but has so far failed to find any predictive sequencing. Pity that!