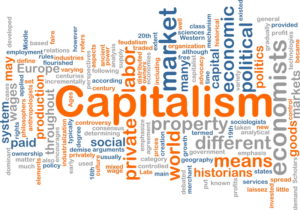 Long ago, capitalism was defined as a political and economic system in which a country’s commercial activity was controlled locally for private profit. Japan is a constitutional monarchy with a democratically elected government operating in an openly capitalist society. The Japanese Central Bank is 100% controlled by the Japanese government. So far so good!

The Japanese Central Bank currently owns public and private assets ($5 trillion) worth more than Japan’s entire GDP. It is a leading shareholder in 38% of Japan’s public companies; and it owns 76% of all quoted ETFs. This is the antithesis of capitalism – but in this wacky world nobody seems to notice.

Consider the circumstances whereby Switzerland can now borrow money from investors all the way out to 50 years at absolutely no cost. In fact, investors will pay the country for the privilege. Why would anybody want to tie up money for fully 50 years and be guaranteed to receive a negative return?

The European Central Bank, which governs the Eurozone, has pumped more than €2 trillion into the markets by purchasing vast quantities of public and private assets. This has resulted in extremely low bond yields and interest rates – most of which have now gone negative. Central Bankers are always cautious about their future intentions but it seems clear that the ECB will continue to drive interest rates to lower sub-zero levels and may even follow the Bank of Japan by purchasing company shares. The US Federal Reserve is also getting in on the act, although they are starting from slightly higher interest-rates.

MMPI is not questioning the integrity of Central Bankers – they surely know what they’re doing? But we do have a real difficulty in understanding why it is necessary to turn capitalism on its head. After the industrial revolution many of the industries were in State ownership. Then in the mid-to-late 1900s governments divested of these holdings by privatising them. Who can ever forget the “Tell Sid” advertising around the sale of UK companies back to private ownership?

At its core, capitalism works by allowing mere mortals to participate fully by borrowing and depositing at reasonable levels. The move to negative yields means that savers have been severely penalised and the capitalist core is now out of kilter. Potentially, this has concerning consequences for modern society. The expectations of pensioners have been shattered. The business models of traditional banks and insurance companies lie in ruins.