It is said that theories are expounded about absolutely every conceivable topic – the Meaning of Meaning is an example. It’s essentially an examination of the influence of language on thought – and how those thoughts are conveyed to others. It seems that Central Bank governors are keen advocates of the theory as they are well practiced at using “thoughtful” language in their communications to the market. The US Federal Reserve is especially proficient – but it is not alone.

Most of the headline items that influence markets are the Fed’s observations on interest rates. The actual language used is English but a casual listener would be forgiven for believing that it was a wholly different dialect. Fed-speak is now recognised as just that – Fed-speak! Ordinary words like “patient”, “soon”, “measured”, “accommodation”, etc. take on different nuances when uttered by the Fed. The use of alliteration is especially favoured, data-dependent; implied inflation and rising rates are just some of the common examples.

It has long been recognised that language can be understood very differently by individuals. Although the following is an example of confused writing you can easily see where even more confusion might arise with the spoken word. 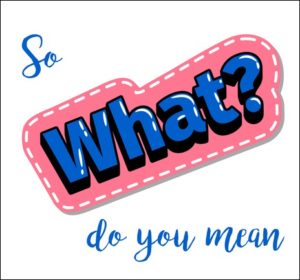 I want a man who knows what love is all about.
You are generous, kind, thoughtful.
People who are not like you admit to being useless and inferior.
You have ruined me for other men.
I yearn for you.
I have no feelings whatsoever when we’re apart.
I can be forever happy.
Will you let me be yours?
Ger

I want a man who knows what love is.
All about you are generous, kind, thoughtful people, who are not like you.
Admit to being useless and inferior.
You have ruined me.
For other men, I yearn.
For you, I have no feelings whatsoever.
When we’re apart, I can be forever happy.
Will you let me be?
Germaine

This explains why an industry has evolved around the outpourings from Central Banks’ speeches – What exactly was said? What exactly did they mean? Traditionally they didn’t say anything in advance or subsequently – they simply acted as they saw fit. That prompted accusations of opacity and lack of accountability resulting eventually in the unwholesome position that we see today.

Patience is supposed to imply endurance and staying power – not “things are not changing”– and data-dependent surely means a reliance on information – not “no change unless we have a reason”. A considerable time means a long time. Right? Not in Fed-speak! It is used to indicate an indeterminate time-frame more akin to “the foreseeable future”. The dictionary definition of accommodation is a lodging house but Central Bankers take the root verb, turn it into a noun and create an illusion of easier investment conditions.

Sometimes it would prove more beneficial if instructions were simpler; STOP; START would be good.  But no! “Irrational exuberance” was famously used by Alan Greenspan to express caution when DANGER was more accurate. Regulatory language is no longer understandable – BEWARE!