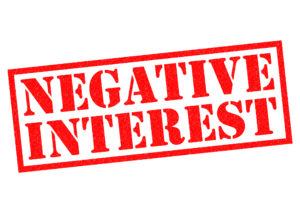 There are all sorts of consequences to negative interest rates that are only now coming to the attention of consumers. While banks will want to resist passing on negative returns to retail depositors the pressures will eventually become overwhelming. In the meantime, consumers have plenty to consider.

In commercial banking, banks have historically enjoyed “free floating” funds; money that sits passively on current accounts or money that takes “clearing days” to move from one account to another. In such instances, a bank somewhere grabs the benefit – but only where interest rates are positive. In the negative kingdom free-floats will be charged to consumers. Imagine transferring funds to your solicitor a week before purchasing your new home. The money sitting in the account for a week will be worth less than the transferred amount!!

Investors in government bonds are already paying the sovereign for the privilege – meaning that governments are now borrowing and receiving interest on the transaction. This clumsy calculation ensures that long-term investors are guaranteed a negative return. That is bizarre! Compound interest is a powerful force in finance but its potency works in reverse when interest rates are minus. That is truly bizarre!

Such an upside-down world will up-scuttle a lot of norms.  Companies that have traditionally delayed settling creditor invoices will now be incentivised to pay much earlier. While, conversely, debtors who were always delighted to get paid might retort, “Take your time what’s the rush.” Insurance companies follow a well-worn path of collecting policy premiums before settling insurance claims. But if it costs them money to hold the cash, they may be coerced into settling much quicker. Negative rates also put immense pressure on retirees forced to depend on minus-deducting incomes. The list goes on and on.

Pension calculations can, thus, be thrown into ineluctable disarray. Normally, employees would expect to see investment forecasts showing a rise in their future pension projections but in the topsy-turvy world of negativity the present value of the pension fund will exceed its value at retirement age.

Imagine the suitability implications of advising clients to invest in long-term products that are guaranteed to return a loss. Financial institutions will need to charge for deposits and pay interest on loans. Profitability will be completely obfuscated. Hence, rating agencies will have to re-write their instruction manuals. Well-managed companies with a strong balance sheet will be downgraded in favour of highly indebted businesses!

The ultimate outcomes and the likely consumer responses to the emotional turmoil are impossible to ascertain but as a starting point it’s easy to see why depositors might react by buying safes or bolstering their mattresses. Puzzlingly, research from Japan, where rates have been negative for a longer time than Europe, seems to indicate that consumers are now saving more than before. This is baffling to economists.

It has even been suggested that some of the legacy IT systems in financial institutions are incapable of working with negative numbers. This smacks of Y2K hysteria and other such nonsense.