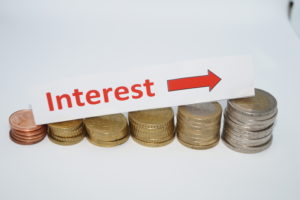 We are delighted with the reaction to last week’s piece on tidying up your finances. Investing time and effort can yield huge rewards!

The economy ebbs and flows in familiar cycles. In the bad old days, the ups and downs attracted monikers like boom/bust. The catalyst for these peaks/troughs in economic performance was interest rates – or more correctly politically-propelled interest rates.

It is scarcely credible that just over 20 years ago finance-ministers controlled interest rates – manipulating them upwards just after winning power and driving them lower ahead of an upcoming election. Thankfully, global Central Banks now act independently of political whims and the regularity of boom/bust cycles has been deflated. But, nevertheless, cycles remain.

Interest rates are now at historic lows and the bond markets are depicting the fanciful scenario where governments and large corporations can borrow at negative interest rates. Investors on the other side of these transactions are guaranteed to lose money. This is unprecedented in the history of financial markets. It is having a hugely unsettling effect on insurance companies and fund managers, who traditionally use bond markets to generate a positive return.

While depositors and savers suffer in this environment, the fortunes of borrowers have never been better. Will these circumstances persist; or will the traditional norms of higher interest rates return? The truth is that nothing is certain, but the current picture does seem remarkably odd.

When MMPI offers mortgage advice, repayment capacity is a critical consideration. After that, the primary concern is establishing a degree of certainty around monthly repayments. This can be achieved by fixing the rate for a period of time; rather than having the costs impacted by variable market movements. While this is a prudent approach, the sting is that fixed rates are often much higher than the prevailing market rate. But, nonetheless, depending on individual circumstances, a fixed rate is normally a worthwhile option.

Nowadays, it’s even more enticing. 5-year fixed rates are down to 2.5% and are lower in some cases (1.95%). This type of pricing is tempting both for first-time buyers and all mortgage borrowers. The rates are not universally on offer. They are available to MMPI through Avant Money, who have been operating in Ireland since 1997, originally as MBNA and more recently as AvantCard. The business is owned by the Spanish group BankInter, which has an investment grade credit rating.

MMPI has been appointed by Avant Money to advise on these mortgage offerings.

Our advice is as follows:-

The point is not about trying to second-guess where interest rates are heading next. It is about providing assurance to first-time buyers and existing mortgage holders on future repayments.

As an essential service, MMPI is operating normally, albeit remotely; www.mmpi.ie