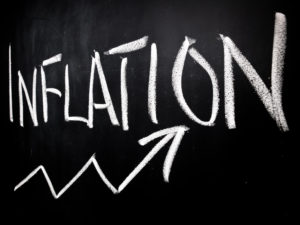 Everybody under 35/40 years of age probably giggles (or worse) when old fogies ramble on about inflation. There has been talk of inflation spiking on several occasions in the past decade; but it never happened. So why should the current talk of higher inflation concern us? It probably won’t happen this time either! MMPI begs to differ.

The classic definition of inflation is a general increase in prices and a fall in the purchasing power of money. Standard economic theory teaches us that an over-supply of money will deplete its value and stoke inflation. Western Governments and their Central Banks have issued vast sums of “new” money – inflating their balance sheets like never before. This is particularly true in the US where the Federal Reserve has unleashed trillions in fresh money. The foreign-exchange markets have not been slow in punishing the US dollar – driving its value down -5% in the past month against the euro.

One of the quirks of the FX market is that currencies are coupled in exchange – so if the dollar falls in value the euro gains; and if the euro falls sterling gains, and so on. It might appear, therefore, that the euro is doing quite well at the moment on foot of the recent EU-wide financing agreement in Brussels. But this strength is only relative to the dollar’s weakness. A better measure of the euro’s purchasing power is to measure it against a physical asset like a commodity, say, gold. The euro has lost -9% of its value in the past month against gold; and even more against silver.

It seems that others share our views. Just look at the rise in assets that are typically good hedges against spiking inflation. Physical assets like precious metals; industrial commodities, shares in consumer-staple companies, land, etc. are all doing well. If inflationary times are upon us, then holding on to cash will not be profitable. In addition to receiving a nil or negative nominal interest rate, your return in real terms will be ravaged by higher inflation. Time to re-adjust?