Inflation is described as a well-sustained increase in the price of goods and services; and is measured as an annual percentage change. At first glance any price rises in an economy might be viewed as 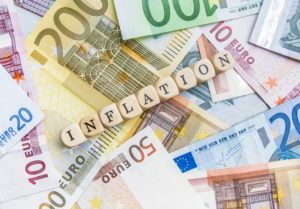 unwelcome, but this is not the case in reality. Homeowners will usually spend more if they see the value of their property rising. Business owners will expand more if they can get extra for their produce. Consumers will purchase more if they believe future prices are going up.  Central Bankers believe that inflation running at 2% annually is desirable – and who are we to disagree? But it was not always so!

The British Labour Party won the UK General Election in 1997 and immediately stunned financial markets by handing over control of interest rates to the Bank of England. This was important because interest rates are an expression of the cost of money and, therefore, a significant influencer of inflation. But inflation is not easily understood and is not comfortably defined.

The common Consumer Price Index (CPI) is based on a survey of what households are buying; and the Personal Consumption Expenditure, which sounds like it should be the same as CPI, is based on surveys of what businesses are selling. The key word in this paragraph is “survey(s)”. Yes it’s true inflation is measured by resorting to surveys!

In Ireland, purchasing surveys are conducted by the Central Statistics Office. MMPI has no wish to be offensive or condescending but the outcome of such interrogations is hardly scientific. Consumers are asked – shops are checked – and businesses cross-referenced in an attempt to understand what consumers are buying; what companies are selling and how much retailers are charging.

A large part of the accuracy verification is what questions to ask and what products to include. Should cigarettes be included if only 18% of the population smokes? Shouldn’t people be asked about their illicit smoking habits? How truly accurate are the answers to questions on the cost of soliciting or supplying sex? How are things like software and new technology evaluated? There’s a lot of software that’s free of charge but which leads on to other consumer purchases. How accurate is it to compare the costs of TVs year-on-year when the technology underpinning today’s flat-screens is vastly superior to what was available in far bulkier models only a few short years ago?

The difficulties in measuring all of this precisely are immense. Approximations and estimates abound. And yet Central Banks place a significant reliance on inflation levels when determining movements in interest rates – raising rates to dampen inflation and lowering rates to stoke inflation. The levers of interest rates are crude controls. They do not have an immediate impact on consumer behaviour and often take 12 months or more to take an effect.

If interest rates rose tomorrow by, say, 0.25% would it stop you buying a sandwich or a pair of shoes or a new dress anytime soon? Inflation is misunderstood and may also be overinflated!