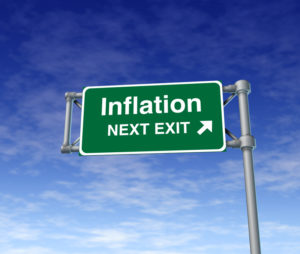 It seems that others share our views. Just look at the rise in assets that are typically good hedges against spiking inflation. Physical assets like precious metals; industrial commodities, shares in consumer-staple companies, land, etc. are all doing well. If inflationary times are upon us, then holding on to cash will not be profitable. In addition to receiving a nil or negative nominal interest rate, your return in real terms will be ravaged by higher inflation. Is it time for investors to re-adjust their thinking?”

MMPI wrote the above words in a Thought Leadership piece on 14 August last year, 2020. We have no difficulty repeating the message. Higher inflation is now here!

This is a novel phenomenon for many people and how we may react to higher prices cannot be predicted with certainty. For example, in deflationary Japan, consumers have persistently delayed purchases in the knowledge that prices will be lower in the future. This has exacerbated the deflationary trap. In an inflationary environment, will consumers accelerate purchases in the expectation of higher future prices? Nobody knows for sure but the likely behavioural trend will dominate the debate in the months and years ahead.

As we predicted, higher prices are now a given; but for how long? Will the inflationary trap come to dominate the economic agenda? Almost scarily, there is a clear divergence of opinion. Some believe that hyper levels of inflation are on the way and will persist for many years. Central Bankers appear to view higher inflation as transitory only. Which side of the argument are you on? Getting it right will impact your finances!