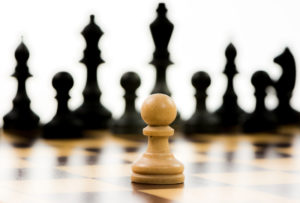 Having perceptions of superiority is a recognised condition (colloquially termed “notions”) where people overcalculate their own limited abilities and hold opinions on topics that they actually know very little about. It’s effectively a cognitive bias that’s characterised by a brashness and impudence, pontificating on all and sundry. Brilliantly portrayed in comical fashion by Hyacinth Bucket in the British sitcom Keeping Up Appearances; it, however, extends much further than that.

There are many examples of “professionals” practising in fields where they have no qualifications (colloquially “cowboys”). This is often classed as fraudulent impersonation; but it undoubtedly has its roots in illusory superiority. A sham “gardener” who plants flowers in the wrong soil-type is on a completely different level of pretence to a rogue “doctor” performing surgical procedures. But both display illusions of superiority.

In practise, there is a fine line between having confidence (and indeed pride) in one’s ability to complete tasks; and over confidence that crosses into supercilious  territory. For far too long, outward expressions of confidence have been mistaken as a measure of potential. The alpha male exudes confidence; while the much more able female is less outwardly assured. This has been a crumbling cornerstone of recruitment and promotion for ages. The twaddle has most likely resulted in the types of people who continuously achieve high office.

Confidence alone is simply a measure of conviction. It should not imply anything more significant. But under the watchful eye of HR Managers, individuals who are good at their current jobs are promoted to management roles requiring completely different skills. Newly appointed managers are encouraged to exhibit the same level of confidence that they previously displayed. They are, in many cases, urged to overvalue their own abilities.

It is beyond doubt that operatives who perform their functions in a capable fashion do not necessarily have the skills to manage people. But the feedback loop, that recognises confidence as ability, promotes illusory superiority. The bias is also responsible for narcissism and other oddities that drive egotistical behaviour.

It is far too much of a stretch to imply that all promotions and career enhancements are ill-judged; but the evidence suggests that yesteryear’s personnel decisions may have been dangerously misguided; reflecting badly on the behaviour and decision-making of current leaders.

Illusory superiority is a worrying concept. It deserves to be recognised and tolerated in the case of Hyacinth Bucket. It evidences itself as a plea of desperation from Yosser Hughes in the desolate TV series, Boys from the Blackstuff; “Giz a job, I can do that!” Where it is suitably controlled, it is a positive personality trait that shows progressive, yet balanced, thinking.

Where it is uncontrolled it results in delusions and intolerable arrogance. Witness all of the global financial scandals that occurred in the past; and continue to blot our landscape. All are caused by breaches of controls and procedures. All are perpetrated by means of deceit and condescension. And, incredibly, all fail to appreciate the important role played by illusory superiority!