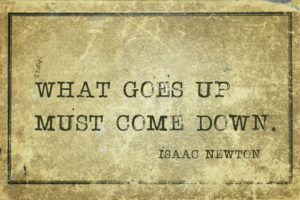 Reversion to the mean is one of the most common themes in human history. It is the number one element in financial markets, global economies, company performance, nation states, presidential reigns, livelihoods; absolutely everything. What goes up must come down and what performs well for a period will eventually underperform. Mean reversion implies that nothing lasts forever.

Tackling the subject from the perspective of financial markets is interesting but it equally applies to other disciplines. The absolute wealth in society cannot outgrow the gross domestic product (GDP) of the economy in the long run. Short-term anomalies may and do occur; driven mostly by debt, which has an immediate impact on societal wealth and a lagged effect on GDP. But in the long run the wealth in any society must be aligned with the GDP of that economy; since economic growth drives wealth growth. That is not to say that they should be identical – but, rather, where they become unsynchronised, they will ultimately regress towards an equilibrium.

All economies have a well-established historical mean value when wealth is relative to GDP, and every county reverts to that mean regularly. In the biggest economy of them all, the United States of America, the long-term mean value is 380% and, at present, wealth-to-GDP is as high as 500%. In other words, mean reversion will destroy plenty of wealth on its journey. Investors have learned the lesson of mean reversion many times over the years but still manage to forget the rationale behind it.

The longer an asset class keeps on rising in value the more it overshoots its fundamental value; and, therefore, the more likely it is to revert to mean. There are many examples throughout history and the current downturn should be seen in this context.

Wealth is an important driver of the feel-good factor in society. It is a relative term, but most people experience it to some extent or other. It too contains the dynamic of mean reversion. It is rare that one’s net worth rises steadily year after year. It is much more common for wealth to ebb and flow; and to show signs of both ups and downs along the way.

We can’t say for certain that the current bout of market unease will resolve itself quickly; but we can see patterns from history. Market commentators have a habit of offering up reasons why asset prices will continue to rise; and they are careful to acknowledge that declines along the way are inevitable. They are also clever at predicting that the catalyst for change may well be caused by something quite extraordinary – that nobody seems to have thought about. Maybe a newspaper headline that grabs attention; or a surprise economic number; or a faulty piece of computer code. Nobody dreamt up a dangerous piece of RNA with a strange name.

In the current world of ultra-fast trading, eccentric swings are almost inevitable. Gleaning clean data from the drivel is imperative. The patterns from history have spoken.