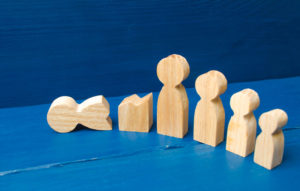 A metaphor is a figurative expression that makes an indirect comparison between two ideas that are not physically alike but can be joined in common by way of a little lateral thinking. Life is a rollercoaster is a classic example. The joy and hardship of one’s experiences in life can be viewed as highs and lows; and ups and downs, which are similar to the movements faced on a rollercoaster. A simile is analogous but the comparison is more direct. Football is like a religion to some people.

Metaphors are used extensively by writers and poets to add extra dimensions to language and also to offer some mystique. For example, Ireland is often referred to as Roisín Dubh or the Emerald Isle. Metaphors are also used by accountants and economists – and it’s incredible how finance and money are so commonly compared to a liquid form, like water, flowing through the environment – just like a river.

Cash flows and liquidity are regular terms that are used to conjure up money movements. When cash gets tight, it’s often referenced as drying up. If interest rates are not fixed or rigid they are deemed to be floating. Stagnant salaries are termed a wage freeze – and similarly if assets are tied up under a court order they are described as frozen assets.

Liquidity and solvency in accountancy refer to how freely finances flow; and how quickly sluggish assets can be dissolved into liquid assets. The expression sinking is used to describe a business drowning in debt or an economy that is not running smoothly. The water analogy and use of liquid-like metaphors are constant features in finance; but are they accurate? Could they be the cause of rapid and erratic market movements? After all, if we used the metaphor of a pond rather than a river then everything might slow down. Whereas, if we avoided liquids altogether and used, say, rock – then maybe market prices would grind to a halt.

Metaphors are an important aspect of linguistic expression. They help conjure up familiar images in unfamiliar areas. Using the standard language of accountancy and finance would leave most observers cold and none the wiser. However, the clever imagery of flowing water paints a picture and helps explain away the turgid jargon. But metaphors are open to manipulation. When using the metaphorical examples of water and rivers, commentators conveniently ignore the peripheral damage that can be caused where a raging torrent overflows into the adjoining countryside. Or where flooding inflicts pain and death in the long term.

Maybe we’ve gotten lazy. Metaphors are about crafting explanations in a new light – thereby, revealing fresh avenues of thought, ingenious innovations and wondrous new inventions. However, metaphors only display their true worth when their boundaries are stretched beyond the norm. At every turn, our imagination is compromised by reality; but metaphors are supports that add depth to our understanding.

Maybe it would be wise to consider a new theme for metaphors describing the complex financial markets?