Optimists do not deal with impossibilities; for them everything is possible. Realists know better! In legal terms, impossibility is a perfectly good excuse for the non-performance of a contractual obligation where circumstances have changed or where the initial underlying assumptions of the contract were incorrect making it impossible to honour the terms.

In this context, performance is the successful completion of an obligation. Therefore, a breach of contract does not arise if performance is an impossibility. It is useful to grasp the distinction between contractual impossibility and legal frustration. Impossibility involves events occurring after execution of the contract whereas frustration is caused by unforeseen events that make the performance impractical. The notions of impractical and impossible are often confused. For example, it is not impossible for a cow to jump over the moon but it is impractical! 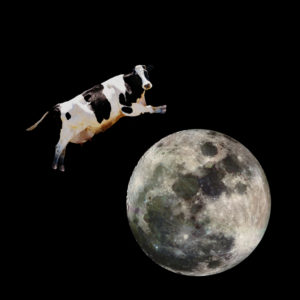 For example, it is not impossible for a cow to jump over the moon but it is impractical!

In financial markets the terms impractical, frustration and impossible also apply. Sub-zero deposit rates were thought to be impossible but they have come to pass for large companies and pension funds. Frustration, on the other hand, is an every-day occurrence in trying to determine what Central Banks will do next. It is not impossible that stockmarkets will continue to rise but it is an impractical stretch to believe so.

However, technological advances mean that what was frustratingly impossible previously is now eminently achievable. Implying company valuations that had stalled because of uncertain future profitability have now got a new lease of life. There is evidence of this throughout a wide variety of industries as new technological breakthroughs open up unforeseen horizons

It is also the case that the results of experimentation are coming to the market much faster than before. Given man’s ingenuity and ambitious drive it seems ridiculous to suggest that anything is impossible. Maybe optimists have it right. Tomorrow’s achievements are yesteryears’ impossibilities and we cannot accomplish the impossible without first attempting the ridiculous

Mathematicians are having to re-write their equations – not that they were necessarily wrong – but that ever-faster computer programmes have allowed them perform calculations more speedily; thereby, delivering new ideas and new solutions much quicker than before. It is this evolutionary speed that, paradoxically, may create frustrating impossibilities in the future. Humans will simply not be able to keep pace with computers!

Through the generations we have always been faced with trying to determine future events. It has never been easy but there forever seemed to be a steady move towards progression and resolving what appeared to be frustratingly impossible. Big discoveries came along sporadically and the lives of mere mortals changed substantially. But now innovations that will dramatically revolutionise our lives (and the financial markets) are going to arrive at an unprecedented pace. Solving what was frustratingly impossible will not be slow.

As Gershwin might have said; “Old Jonah he lived in a whale – Down the back real close to the tail – A frustratingly impossible career if he wanted to steer – And I’m preaching this sermon to show – It ain’t necessarily so.”