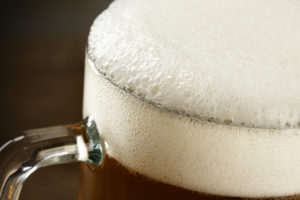 Froth is one of those onomatopoeic words that sounds exactly like its meaning. Like hiss, cheep, moo, sizzle, splash and many others. Froth is a foam formed in liquid, but it can also imply worthless value. It might even suggest excitement or anger – frothing at the mouth. It can indicate disease or illness. But mostly it is recognised as the insubstantial formation of bubbles that are light and airy and easily extinguished.

Beer drinkers will know it best as the effervescent head at the top of the glass. The bit that sits above the real beer and has a tendency to command attention. There is either too much or too little and rarely just enough. Nevertheless, it is an integral part of the visual experience of a pint of beer; even if it adds little to the actual taste.

Over the years, financial commentators have taken to describing certain market conditions as frothy – using the term to portray the area at the leading edge of a price chart that seems flimsy and fizzy. As prices move higher over time, some observers see a detachment from the true underlying value (or real beer) and proclaim a frothy bubble. While others simply see a rising market. In due course, the frothy bubbles disappear; and the chart reverts to its core value. An action that is often termed “reversion to mean”.

In falling “bear” markets, a decline of 20% or more is seen as an indication that not only has the froth been blown away; but the fundamental value has also been dented. There is no such threshold to depict rising markets. Rather there is an expectation that prices will push ahead in small incremental steps – giving rise to confidence and the expectation of more incremental steps. A difficulty arises where prices become dislocated from expectations and bound higher. Some see this as acceptable if the reasons are justified; while others see froth.

In recent weeks share prices jumped higher on foot of positive vaccine news. The market reaction seems valid. After all, the scientists have repeatedly told us that we’re going to need a vaccine to cull this dreadful virus. On the other hand, the move to higher levels was far too sudden for some. It did not follow the pattern of small incremental steps.

So, we have a dilemma, but it’s not a new dilemma. At every point in history we have buyers and sellers (bulls and bears) who think theirs is the true wisdom. When will they ever learn that the future is uncertain? The turnaround in share prices since the collapse in March this year has been remarkable. All of the losses have been recovered in 7 months. It seems fair to argue that this happened too quickly. But it is equally fair to counter that the serum is a gamechanger.

It is surely reasonable to conclude that good news and bad news will continue to produce froth. Wasn’t Arthur Guinness clever; a head with no froth!