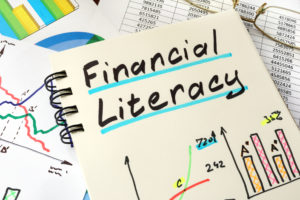 The definition of financial literacy is highly subjective and it should receive due care and attention. Illiteracy is a pejorative term that is best avoided. A reasonable observation might be to describe financially illiterate-individuals as those who, due to their personal circumstances, may not fully understand a product or service and consequently may be especially susceptible to reading only the headlines and not the small print; or following the glossy pictures; or listening only to the positive and/or simple elements of the product description.

McGraw Hill sponsors a Global Financial Literacy Survey of 150,000 people in more than 140 countries. Its results show that Irish people are not the most financially literate in the EU with a score of 55 compared to 67 in the UK.

Interest compounding is a concept that causes most confusion even though Einstein, no less, described it as the most powerful force in the universe. Most people just don’t understand it. Consumers tend to underestimate both the investment returns to be gained by investing for the long term; and the total repayments to be made on a mortgage. This cognitive failing is particularly injurious when dealing with credit card debt and the compounding impact of exorbitant interest rates.

Financial literacy should be understood to mean not simply cognitive ability. For example, a blind person will not be able to read a product brochure unless it is produced in braille. A deaf person will not be in a position to hear verbal descriptions of the product. It should also be remembered, of course, that there are many interim stages of blindness and deafness (and other impairments) that make it difficult for consumers to understand the product or service being offered.

MMPI has developed the Financial Literacy Solver in an effort to measure the financial literacy and potential vulnerability of the respondent. The Solver should not be mistaken for a quiz or an IQ test. MMPI treats inaccurate responses as a warning sign that the consumer may require special assistance.