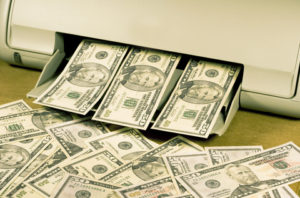 There was a time when fake money was considered only counterfeit but a certain foreign gentleman has re-introduced the “fake” word into the common vernacular with a meaning that’s closer to “pretend” or “imaginary”.

Fiat money is fake money! Fiat money is something that is declared by a government decree. The magician saying “Hey Presto” comes to mind. But rather the Finance Minister says, “I, hereby, declare that this piece of coloured paper, hereinafter, represents money – and you’ll have to take my word for that”. It is incredible to think that consumers have no difficulty with this tenuous concept. Even tourists are happy to accept exotic pieces of coloured paper issued by foreign Central Banks.

The Federal Reserve, the world’s most prominent Central Bank, is a peculiar case in point – although other central banks have similar traits. The US Federal Reserve Bank is made up of 12 individual banks, based in various regions across the US, that have a quasi-private-public ownership structure. None of the Federal Reserve Banks is a direct part of the US government and yet one of their central committees plays an active role in determining how many US dollars are in circulation around the world at any given time. The Fed’s (FOMC) committee has created over $12trillion out of thin air over the past several years in an effort to stimulate the sluggish US economy.

The flow of this money is complicated but it can be summarised in the following circular conduit. The Federal Reserve creates new money where money did not exist before and buys US bonds from the US government. The government uses this money to pay down some debts and deficits already incurred. As the bonds mature the US government pays back the Federal Reserve with money it does not have. This is an unsustainable process whereby the participants appear to pretend that all is in order. Please feel free to substitute the European Central Bank and others for the Federal Reserve above!

Does this pretence appear somewhat deceitful and fake? It certainly seems so!

To help understand this conundrum using something a bit more tangible than money flows consider the following. In addition to buying government bonds the central banks have been buying mortgage-backed securities; in other words real physical assets. They are now the biggest landlords in the world. It would be interesting to learn what plans they have for these properties – but they remain tightly silent on the matter. Consumers understand what it means to own property and how important it is to plan for the future.

It appears that, as taxpayers, we have placed an inordinate amount of trust in unelected officials to sort out the current predicament and provide us with a rosy future. The complexities of high finance are difficult enough for consumers to understand without the added pretence of fake money. If the trust was ever to breakdown there would be a surge towards other stores of value – isn’t trust just a wonderful feeling?