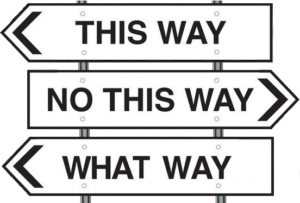 d in abundance by those in authority. It is the conduct demonstrated by being so knowledgeable about a subject that one is ignorant of what it’s like to know nothing.  An expert knows everything about a subject except one thing – what it’s like to know nothing. Experts often struggle to understand a less-knowledgeable person’s point of view. It’s an impasse.

Comedians use the concept to joke about giving directions to a stranger – “Take a left at the pub that used to be called Murphy’s!” Or chefs describing a recipe “Boil for one hour” – not even dreaming to explain that one needs a pot and water. Or the assembly instructions on a flat-pack product because the authors cannot sense what it’s like not to know how to assemble it.

Advertisers use imagery to stimulate the attractiveness of their products. Over the years, Guinness has created many such images to great acclaim. But advertisers can show plenty of expert blindness too. Guinness went to great lengths to harmonize the rope bridge at Carrick-a-Rede with its harp brand. In subsequent feedback sessions not one consumer understood the intension.

Academics use language that baffles others simply because of expert blindness – they can’t conceive of what it’s like not to understand. Legislators pass laws to tackle homelessness or extreme poverty but they can’t know what it’s like to be living on the streets. Governments pass budgets and prioritise spending but can’t fully appreciate the impact on certain sectors of society. And yet these so-called experts speak eloquently of their actions and how their proposed measures will tackle and resolve the problems.

This is not intended to be a rant at politicians. It is simply pointing out the existence of expert blindness in many aspects of our lives. Despite their best endeavours, those in positions of influence need to be aware that the flaw in their behaviour exists in order to avoid alienating themselves from mere mortals. If people consistently don’t get the obvious then it’s almost certain that expert blindness is in evidence.

EU bureaucrats in Brussels stand accused of displaying expert blindness by being out-of-touch with ordinary citizens. ECB governors make economic decisions in conclave – decisions that are ostensibly concerned with money supply but which impact on every person in the EU. In insurance and finance, professionals tend to use terminology that consumers do not understand.

There is little doubt that academics; politicians, legislators, bankers, financial advisers and others often abuse their positions of influence by arrogantly talking down to their audience; treating their customers with contempt and brazenly ignoring conflicts of interest. But there is also the real fear that many of these experts, genuinely believing that they are acting with fiduciary care, simply display expert blindness and inadvertently mishandle relationships.

MMPI believes that so-called experts need to be grounded in reality. Face-to-face meetings with angry constituents and disgruntled consumers are a great counter to expert blindness.