The empty shelves following the recent snowfall got us thinking about equilibrium points – that finely-tuned balance between supply and demand. The notion of equilibrium is used in many disciplines. In mathematics, an equilibrium point is a constant result in a differential equation. In engineering it is the pivotal fulcrum at which structures remain stable. In standard conversation the term equilibrium is often used to describe the status quo. In finance, equilibrium is the specific point where demand matches supply at the same price. 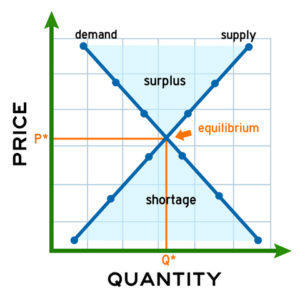 For supermarkets and other retail outlets the equilibrium market point is where the quantity of goods supplied is equal to the quantity of goods demanded. This is the point at which the demand and supply curves intersect. But, of course, in times of extreme dislocation this equation is turned on its head. Queues ahead of opening time should have been a clear indication that there was higher demand. In theory, this should have been matched by greater supply – but as stocks had not been replenished the enhanced demand was diffused only with disappointed shoppers.

A more flexible solution might have been to increase prices. The promise of higher returns in such circumstances should have motivated those along the supply chain to collect and deliver produce to the market even in adverse weather conditions. Unfortunately, most retail markets are not modelled in a way that allows for the immediate tightening of prices to accommodate demand-supply imbalances. If the adverse conditions had lasted for several weeks then higher prices may have resulted.

In the stock market, prices are determined by constantly-shifting movements in the supply and demand for shares. The position where supply and demand is equal is called market equilibrium. Although it doesn’t feel like it, the stock market behaves like a big auction house where buyers and sellers bid for shares. All of the demand and supply is eventually satisfied at variously agreed prices. In theory, therefore, the price of a share at any given time is in perfect equilibrium.

But stock markets, too, have displacements from time to time. Situations do occur where prices are in free-fall (no buyers) or where prices rise exponentially (no sellers). Many fear that such hazardous episodes may become more frequent due to the ever-increasing use of computers to execute trades generated by humans – and, more worrying, trades generated by fellow-computer algorithms.

Computer “intelligence” is a wonderful development and is undoubtedly being deployed successfully in many industries. It works by allowing the software to examine enormous amounts of data and to formulate responses based on previously portrayed patterns. One of the unintended consequences in stock markets is that computers force prices back to the equilibrium point at breakneck speeds. Traditionally, humans have tended to test the mettle of other humans by dangling orders in the market – similar to bidding in bridge – accommodating smoother prices. Computers couldn’t be bothered with such human niceties. They simply whipsaw the prices back into equilibrium regardless of the instability caused. Hence, much larger dislocations!