You may have heard of classical economists Thomas Malthus and Adam Smith but not David Ricardo – and yet it is Ricardo’s thinking that is currently playing out in global geopolitical circles. Ricardo suggested that governments will always struggle to implement long-term policies because consumers will continually second-guess what they’re up to! It was a remarkable insight for somebody plying his trade in the late 18th century. 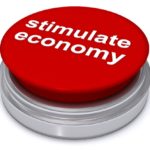 His proposition, which has since been labelled Ricardian Equivalence, explains that as governments try to stimulate the economy by increasing spending and debt; consumer demand remains unchanged because consumers save up to guard against future tax increases. By extension, Ricardo’s thinking implies that governments are not capable of stimulating spending because consumers take a mental note that current windfall benefits will be offset by higher demands in the future.

Fast forward to the 21st century and we have a classic, practical example in Japan and perhaps also in Europe. Japan has struggled for over 25 years to stimulate its economy but consumers steadfastly refuse to spend. The logic is not too difficult to grasp. In an economy of falling prices consumers see opportunities to delay spending – surmising that products and services will be cheaper next month. The resulting implication of Ricardo’s thinking is that countries with high levels of debt should also have high levels of consumer savings – and that is definitely true of Japan and appears to be the case in many other western societies.

When finalising the calculations that underpin his work, Ricardo made some general assumptions that modern-day critics find unconvincing. The notion that consumers can borrow whenever they want is dependent on the availability of credit and the ability of consumers to meet lending requirements. The idea that consumers will save whenever they want relies on them having surplus funds and the foresight to store those funds for a future rainy day. Critics of Ricardian Equivalence believe that consumer behaviour is much more complex than that.

Imperfections or not (and there are many imperfections with countless economic models) it is intriguing how accurately the principle appears to be unfolding in the modern context. No matter how much the ECB tries to stimulate the economy by reducing interest rates (making borrowing cheaper and saving futile) consumers refuse to budge. Could it truly be that they see significant tax increases in the future?

All of this sounds like bad news for politicians and policy makers – their efforts appear to be totally in vain! Regardless of what governments do to intervene, Ricardian Equivalence maintains that consumer spending is determined solely and exclusively by the present-value of consumers’ future income. MMPI does not operate at a macro-economic or macro-political level and, therefore, cannot prove the theory of Ricardian Equivalence. However, we have plenty of experience at the micro level talking to consumers on a daily basis. The lack of respect for policymakers is palpable and the safeguarding of current family incomes is the top priority. MMPI just recording equivalents not Ricardian Equivalence!