If you find your mind glazing over at the talk of trade tariffs and GATT rules the following might provide some perspective. To understand imports/exports and the resulting flow of money, consider a world with only 2 counties and 2 products – say America and Fords; and Europe and Volvos.

Suppose in any given year American consumers choose to spend €100m buying Volvos and the Europeans spend €95m buying Fords. In this simple example America will not hav 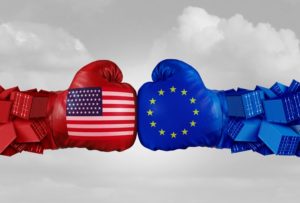 e enough money to pay for the €5m shortfall. The imbalance is known as an American trade deficit and a European trade surplus. Naturally, if this shortfall continues for several years, the balance of trade between the two countries becomes ever more imbalanced.

If the Americans decided to impose tariffs on the European Volvos, effectively increasing the price of Volvos to consumers, we might expect America to import fewer Volvos and for Americans to buy more Fords returning the import-export equation to a more balanced position. But, of course, if the Europeans retaliated by subsequently lobbing tariffs on Fords then the imbalance might be expected to return. So in this very simple scenario tariffs will not produce the desired result.

If we now examine the problem from the point of view of money flows we see that Europeans generate cash surpluses and Americans cash deficits. Human necessities will determine that over time the 2 countries will develop exchanges in something other than merchandise goods. Non-goods and services will become attractive to Europeans as a means of spending their surpluses. While Americans will be anxious to shore up their deficits by providing cheaper prices to their European customers.

The flow of money through traded goods pales into insignificance when compared to the cash flows for non-goods and services. Those in surplus have a natural bent to spend and those in deficit will go out of their way to attract that spending. In effect, Europeans will be attracted by American assets whether it’s real estate and other infrastructure; or government debt; or company shares – or invisible services like tourism and intellectual property. One way or another, the imbalance caused by the trade deficit will tend to be squeezed over time by flows of money back and forth.

Such deficits and surpluses may not be eliminated in any given period and may extend for generations but the interactions of those in surplus and those in deficit generate an acceptable equilibrium.

The imposition of tariffs to one aspect of this finely tuned relationship is detrimental to the whole. A trade tariff may result in a quick result in, say, more local jobs but it will ultimately lead to new interactions developing between the various participants. These changes to the dynamic can have completely undesired consequences. A European tariff on steel imports, for example, may lead to the local production of more ships. Counter-measures by America may mean that the ships sail without the very latest air defences. Tit-for-tat is bad enough; unintended consequences far worse!