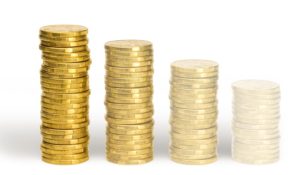 with 15 players on each team. The introduction of one extra player per side will have some impact but the introduction of further players will have less of an impact because they’ll just get in each other’s way. A farmer hiring workers will reach a point where optimum output per worker is achieved. Employing further workers diminishes efficiency and becomes counter-productive. The output per worker falls.

Debt allows governments, companies and individuals to purchase goods and services that they could not otherwise afford. But the level of rising debt is also impacted by the precept of diminishing returns. In the normal course, a point is reached where the amount of debt outstanding and the cost of servicing the debt hit a sweet spot. This results in optimal efficiency where the repayments are challenging but manageable. After that further borrowing produces less real value as the repayments become insurmountable.

Think of climbing a hill on rocky terrain holding water in a bucket that kids use to make sandcastles. It’s likely that you will successfully reach the top spilling nothing. The climb is awkward but the borrowing is 100% productive. Now imagine the same climb with a 10 litre steel bucket full of water. The climb will take much longer and there will be spillage. Ponder on the incremental increases in the size of the bucket and the volume of water – where debt levels become less and less efficient. At some stage you simply cannot get to the top. The task becomes completely futile.

Many constituent parts can become overburdened with debt. At a personal level people become depressed and bury their heads in the sand. A company’s balance sheet creaks and liquidation follows. But when it comes to governments their solution is to borrow more money. It’s almost like nobody assumes responsibility. Politicians come and go every 4 years or so and can always blame somebody else. But there is a cost. Diminishing returns impact here too.

Drawing on the rugby analogy above, consider the effect of more players on the pitch and the play being simply crowded out. This also occurs when ever-higher public-sector debt leads to ever-lower private-sector spending. When governments borrow money they sell bonds. Individuals and companies buy these bonds and so have less and less to spend on private-sector projects. In addition, a government’s utilisation of money tends to be less efficient and productive. This just might help explain why economic growth is so feeble. Possible eureka moment!

There’s a cracking yarn about diminishing returns but it’s not as good the second time around!!