Conflicts of interest have taken on a sexual dimension in recent times with Hollywood revelations; but they can be much more subtle and pervasive than inappropriate advances. At its core a conflict of interest calls for an ethical decision to be made on proper behavioural standards. It is easy enough to spot a conflict at a distance but it can be extremely difficult to identify it at close quarters. 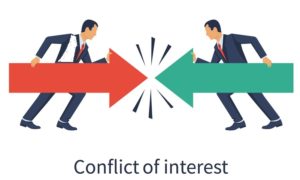 High Court judges need to be exemplary in declaring any conflicting interests for fear they display bias in their judgements. For instance, they should not sit on a case involving a company in which they are a shareholder. They should not be involved in decisions which result in them making personal gains. The issues here are easily understood but how far should potential conflicts be pursued? Should judges excuse themselves from cases involving a bank where they hold their accounts or where they once held accounts 20 years ago? Oftentimes it is unreasonable and unnecessary to go to such lengths but can the perception for discord be just as damaging as a genuine conflict?

Take an example from the world of sport. Nigel Owens is a well-respected rugby referee from Wales. His integrity and fairness have never been legitimately questioned (although some teams on the wrong end of his decisions do become disgruntled). It is wholly inappropriate for him to be appointed to adjudicate at a Wales game. In coming to that decision there need be no suggestion that he would behave with other than the utmost probity. Nonetheless, his appointment to officiate in a game involving his country of birth just doesn’t feel right – and that’s important. The situation could become farcical if he awarded a controversial decision to Wales in the final minutes of a game. But should he be equally barred from refereeing at a club game involving a team that he supports?

Conflicts of interests carry the risk of consequences and in certain circumstances they can be shown to be illegal. Take a husband and wife or other close partnership where the parties work in competing firms. Confidential and damaging information could be disclosed inadvertently in relaxed conversation and/or mischievously divulged for personal gain. At the very least such a conflict should be recognised and made known to both companies. It is usual for members of Boards of Directors to declare a register of interests that puts all parties on notice of where potentially biased decisions could occur. As with our sporting analogy the mere perception of bias may be enough to persuade companies to take remedial action.

As always, financial advisers, who are purveyors of trustworthiness have a particular responsibility to recognise and declare conflicts of interest. MMPI is careful that its business relationships are maintained on a professional basis; and we will not knowingly create situations that may give rise to a conflict of interest. Our primary conflict is that our very viability is dependent on our close relationships with retail consumers.