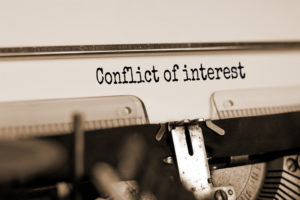 A conflict of interest is a predicament that has the potential to undermine one’s ability to act impartially. While conflicts are not always obvious, a good test might be to question what an independent observer might make of the situation. Could a third-party reasonably conclude that undue influence has been brought to bear and, therefore, the decision maker has been conflicted?

Examples of conflicts of interest abound in every walk of life. Anybody working to achieve nominal targets is likely to have a conflict of interest – a clash between getting the job done right and rushing it through to meet the deadline – sales commissions are a case in point, but other conflicts are more subtle; parents’ roles in raising children, the police investigating crime, a barrister’s search for justice, a Finance Minister’s decision on how taxes should be allocated.

In the financial world conflicts of interest are an ever-present menace. Financiers have a fiduciary duty of care to their customers, effectively meaning that customers place an inordinate degree of trust in advisors when making financial decisions. Whether or not such trust is warranted – and whether or not this trust continues to be extended with the same enthusiasm as yesteryear are moot points. MMPI has long given up arguing that consumers should give the same level of diligence to the purchase of a car as they do to the purchase of a financial product. And MMPI strongly believes that the sellers of both products (and other retail investments) should be governed by the same standards.

EU financial regulation devotes thousands of pages to conflicts of interest in a determined effort to uphold the rights of consumers to receive a fair and reasonable response from financial product providers. MMPI takes an aggressive stance on conflicts of interest and fundamentally recognises that it has a conflicting dilemma every day that it opens for business. MMPI earns its living by providing financial services to retail consumers. The conflict is obvious to all of our employees – we can make more money if we sell more products – but selling more products may not be in the best interests of our customers.

A Chinese “wall” is an invisible construct that exists within financial firms that have trading desks. The “wall” divides the information that the firm has gleaned from its customers and the market data that the traders use to make their profits. In many instances, were the customer data to find a way to the other side of the “wall” the traders could make more money for the firm. In the worst of cases traders might personally profit from the inside knowledge.

Such insider trading is outlawed and the strength of the “wall” is an important element in avoiding this obvious conflict of interest. If customers could touch and feel the “wall” they could form their own view on how well the conflict is managed!

Historical Note: The Great Wall of China is not all “wall”. It is also made up of natural defences such as hills, trenches and rivers that are easily crossed. The “wall” itself is porous in many places and does not provide the purposeful protection for which it was originally designed.