The next time you’re absolutely certain about something just remember that your mind plays tricks with reality. We’ve become knowledgeable about fictional desert oases and mysterious figures in snow storms; and we recognise them as optical illusions that don’t truly exist. We want to believe in what we see but, in fact, the signal to the brain is false.

When it comes to assessing risk our brain sometimes fools us into making irrational decisions because it receives prompts that cloak reality. Our choices are often t 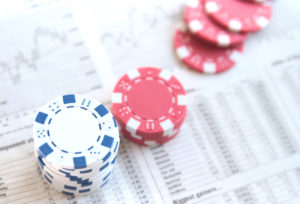 he result of cognitive shortcuts rather than deep reasoning. If it looks like an oasis then it is an oasis – but it may not be! The reason for taking shortcuts may be hardwired into our brains for primal protection purposes. If it looks like danger then it is danger – run. Recognising these cognitive shortcomings is vitally important to help us overcome biased decision-making.

Behavioural psychologists have identified numerous human reactions that follow familiar patterns and display predetermined biases. When faced with a dilemma we tend to rely far too much on our initial assessment. This is a lazy shortcut known as anchoring. If just one other person agrees with us we immediately see this as confirmation of our actions. We must be right! We simply do not tolerate counter arguments. Our belief has been anchored in our heads and it has been confirmed. Changing our mind proves very difficult because we have to let go of the anchor and the confirmation.

Consumers have a skewed view of stock markets. One biased opinion is that they are gambling casinos by another name. Another biased opinion is that with so many clever people involved the markets must be safe. Both opinions are fastened to the brain like barnacles to a rock but neither addresses reality. Recognising the bias might allow the sceptic to take measured risk in the markets; while permitting the supreme optimist to pare back on the positivity.

Another cognitive bias that can cause real harm is termed the endowment effect. Consumers have a dogged tendency to hold on to what they own – even in circumstances where the possession has no value. This is somewhat understandable in the case of an item of sentimentality but it extends to all possessions. Consumers display poor judgement by retaining ownership of shares even here they have fallen in value and the future prognosis is negative. This ill-informed bias sees humans grasping at straws and hoping against hope that things will improve.

If only we could recognise these biases and educate ourselves on how best to respond. Alas, it takes a gigantic effort. It is not easy to overcome strong forces. It is difficult to stand outside the crowd. It is demanding to take time to examine all of the angles. It is challenging to see the light.

It’s likely that MMPI itself falls prey to cognitive biases occasionally but we’ve been working at getting our decision-making right for a long time! MMPI – engendering cognitive bias analysis.