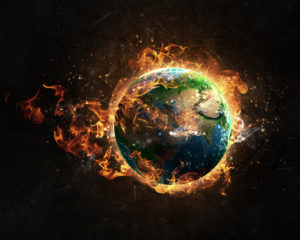 A momentous failure and utter fiasco are apt descriptions of a catastrophe – but the implied negativity should not be taken as a given. Catastrophes can be deemed positive too. A catastrophe could just as easily be described as a cataclysmic upheaval and tumultuous turnaround – implying, or at least hinting at, initial devastation followed by a rosier outcome.

The astronomical expanse is littered with catastrophic events. In the mists of time our planet collided with a similar-sized heavenly body resulting in an enlarged earth and a new moon with a gravitational pull. This matters because it created a planet with a contained atmosphere that was revolving around a right-sized sun in just the right orbit for the primacy of life to evolve. Much later in the ecological timeframe a giant asteroid collided with earth and caused the demise of the dinosaurs – leaving a window of opportunity for mammals to thrive and prosper.

Thankfully calamitous events on that scale remain very rare and while devastating of themselves, they did provide massive disruptions, which eventually proved highly beneficial. The biological evolutionary pathway is also strewn with examples of disastrous calamities and developmental dead ends – leading eventually to homo sapiens and our fellow apes. The jury is out on whether the function of the human brain is indeed supreme progress – that’s a discussion for another day!

The current pandemic is undoubtedly a catastrophe of classical proportions and history teaches us that other epidemics and plagues have befallen civilisation in the past. Given these tragic circumstances it is very awkward to talk of beneficial effects but the technological advances in identifying and treating the coronavirus variants are highly impressive.

The financial world is not short of its own catastrophes. Twentieth century schoolbooks speak about the dreadful effects of the Wall Street Crash of 1929 and the devastation wrought by several depressions following WW1 and WW2. The financial crisis of the late 2000s (including the banking collapse in Ireland) are other events that fit neatly into the description of catastrophes.

If we accept our observation that catastrophes lead to a better future (ultimately) then we can have some hope that despite a variety of set-backs we are still moving in the right direction towards a rewarding time ahead. However, the catastrophe that defines the world’s Central Bankers’ obsession with low-to-negative interest rates is on a scale seldom, if ever, experienced before. This fixation has the potential to be viewed as the greatest monetary calamity of all time.

Negative interest rates are a brand new phenomenon on a par with the equally weird mathematical imaginary numbers and particles of quarks in the quantum world of physics. They exist only because they have been invented to exist. They are a real-world economic experiment and just like all experimentation the testing is done before the results are known.

Economics is not a science. It never can be. It’s a labelled study of human behaviours. If this truly is a catastrophe, let’s hope it has a happy ending!