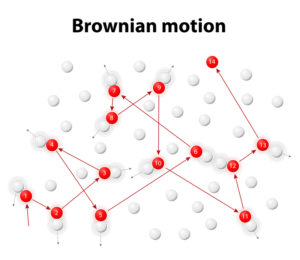 Great tomes have been written about the irregular movements of share prices and no doubt future volumes will have much more to say. MMPI wonders whether Brownian motion could point to a clearer explanation.

Following extensive research in the early 1820s, the botanist Robert Brown noticed and documented the movements of pollen grains in water – they appeared to be totally random. Almost a century later, Einstein added to the intrigue by proposing that the pollen particles were being pushed about by water molecules. This was pretty revolutionary stuff at the time. Once again, the movements seemed to be equally indiscriminate.

However, further experiments showed some neater patterns emerging. The term ‘diffusion’ was coined to explain the movement from an area of high concentration to lower concentration. This was an important breakthrough because it debunked the randomness issue – but also because it explained how substances actually move in and out of cells.

Many people believe that there is absolutely no link between the natural world and the modern economy and finance. MMPI believes this is an unfortunate error of judgement. Examples abound of human ingenuity copying nature for inspiration. Many medicines derive directly from plants. Architecture clings relentlessly to natural design. The aerodynamics of trains and cars are copied from birds and bees.

It is not too much of a stretch of imaginativeness to submit that stock-market movements also follow a natural course. Nonsense! say some.; prices are a function of supply and demand and eccentric human behaviour. Well not exactly! Just like all other facets of human life, finance is now driven by machines; man-made computer algorithms that once behaved in a fairly predictable fashion – but have today graduated to a higher realm beyond human comprehension. And guess what? The results are mimicking nature at every turn.

Randomness is not the friend of economists or investors or biologists for that matter. Humankind constantly seeks explanations for randomness; and machine-learning models are superb adaptors at finding hidden patterns and obscure trends in apparent haphazardness. Computer algorithms now control the inner workings of finance; and their human creators are subservient to their outputs.

But despite everybody’s best efforts price movements continue to defy accurate description. However, casting an eye at Brownian motion may be intuitive. The patterns and trends appear random when viewed as simply pollen grains and water. But when we observe the logic of water molecules bumping into the grains and driving them towards lower density levels, we begin to understand the added complexities.

For devotees of stock markets, it might prove sensible to follow the workings of computer models more closely. They seem to play a much greater role than first imagined in determining future prices.