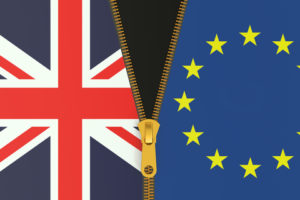 In a referendum on 23 June 2016 the United Kingdom of Great Britain & Northern Ireland chose to leave the European Union by a swing majority of 1.9%.

Prime Minister May wrote to the President of the EU Council, Donald Tusk, on 29 March 2017 formally triggering Article 50 of the Lisbon Treaty. This Article gives EU members the right to leave the EU and outlines the procedure for doing so. The UK has two years to negotiate an exit deal (29 Mar 2019) unless all EU countries agree to prolong the process. It is almost certain that negotiators will seek to extend the deadline but it is not certain that all members will nod their consent.

Earlier in 2017 the UK government published 2 white papers, which effectively set out its exit strategy. They established 12 guiding principles but these created a great deal of confusion and have yet to be accepted by the EU negotiators.

The twelve principles in the white paper were:-

Even if both sides agreed on a common strategy (which they don’t!) the task of completing a harmonious exit would be daunting and would certainly take longer than 2 years. Given the intransigence to-date and the genuinely tortuous difficulties facing negotiators the exit process seems never-ending.

The Lisbon Treaty, signed in 2007, came into effect in 2009. All of the EU treaties and resulting legislation prior to this were written for all members and for all aspiring new members. It was never contemplated that any member would leave – so prior to Article 50 of the Treaty of Lisbon all EU laws were written in such a way that they cannot be untangled to accommodate one member leaving.

Right from the outset MMPI maintained that there will need to be a second referendum to countenance the implications of the Brexit deal. We have not changed our position. Politicians will continue to deal in the sound-bite world of “democratic decisions must be respected”, while the very sizeable minority will continue to struggle to make sense of it all.

From an Irish perspective it is silly to envisage that Brexit will not adversely affect us. It will have lots of consequences for our economy and our way of life. Optimists will shrug it off as just another life challenge to be overcome. Pessimists will worry about the future of democracy. Historians will salivate over the pickings!