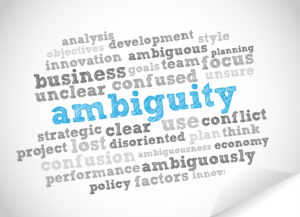 Ambiguity must take the blame for the fudged middle-ground between polar opposites like transparency/opaqueness, truth/untruth, good/bad and deal/no deal. Its meaning is comically ambiguous and open to the imagination! It is strange how certain words conjure up particular links in our minds. For example, the word “torrential” identifies with “rain” even though it should refer to anything that is heavy. Similarly, when we hear the word “unadulterated” we think of “rubbish” and not more correctly an item that is pure and neat. Habit and laziness are to blame for our misappropriation of the word “psychopath” as deranged and mad when it really should describe somebody with a lack of empathy, guilt, conscience or remorse. (Sound familiar??)

From time to time many people can be seen as lacking these traits particularly those who are focused on achieving personal targets within a pre-set timeframe. In such stressed conditions a person’s “normal” behaviour becomes dyspeptic and extreme – reverting to more acceptable levels when the pressure is released. Egotists and bullies are good examples of individuals who display nasty behaviours in some instances but not in others (office tyrant and house angel).

Correctly speaking this depicts psychopathic behaviour and it should be called out as such. Many of the corporate scandals of the past have highlighted breaches in risk processes that were exploited by senior managers demonstrating a lack of empathy, guilt, conscience and/or remorse. In other words, psychopaths who had free rein for short or extended periods of time. Psychopaths who appeared like ordinary mortals in other circumstances. Psychopaths who flitted between relaxing like others in one instance and adopting controlling, coercive behaviour at other times.

Correctly, the libel laws prevent us from naming cases and names but we encourage readers to identify the behaviours of bullies and aggressors who have thwarted the controls in the past or who will frustrate the rules in the future. Annoyingly, there is frequently only a fine line between legitimate, persuasive demands and aggressive, unacceptable orders. Unfortunately, people are not good at distinguishing where the line is drawn in every instance – but we are experts at noticing its existence  in hindsight.

Rules and regulations will forever be tested. That’s just what humans do. Regulators often call for purer ethical behaviour but that’s just another limitation which, though eminently worthy, is lined up to be breached by unscrupulous individuals who may at other times behave honourably. So, what is to be done? Are we to drift forever from scandal to scandal without learning lessons?

Copping out by blaming weak controls or over-officious regulations will not teach us anything. It is important to recognise that flawed human behaviour is at the core of all scandals. Describing such behaviour as psychopathic will enable businesses to identify deficiencies and deal with them in a meaningful way. The ambiguity around who or what is to blame is the cause of much soul-searching. In this season of resolutions to all we should embolden each other to be less ambiguous in the future.